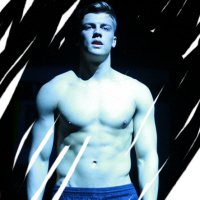 There's something quite old-fashioned about Richard D. Sheridan's Odd Shaped Balls; monologues are always popular of course, especially on the fringe where big casts are an extravagance, but it feels like a long time since I saw a monologue with very little direct address to the audience, consisting mainly of John Godber-style quick switches between a variety of contrasting characters. Jimmy Hall (Matthew Marrs) is a professional Rugby Union player whose public profile suddenly grows when his team are promoted, and he's credited with turning their fortunes around. He's new to the spotlight, and not particularly good at handling it - the show opens with him accidentally swearing repeatedly in a live post-match TV interview. So he's not well-prepared for the press to get interested in his personal life: He has a long-term girlfriend, but is cheating on her with a man.

Dom is a former school friend he reconnected with and fell in love with. When his manager makes a cryptic statement about him losing focus, Jimmy - mistakenly - thinks he's found out about his boyfriend and wants him to break it off. 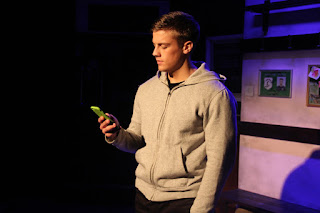 So he breaks up with Dom, telling him it's what his manager wants. Angry not just about being dumped but also about the interference, Dom leaks the story to a sports blog, and it quickly finds its way into the press. Although the format of a monologue that showcases the amount of different accents and characters an actor can do is a bit old-fashioned, Marrs acquits himself well with it: I could have done with the difference between Jimmy and Dom's voices being a bit more obvious but otherwise Marrs creates a cast of supporting characters that quickly become familiar. Phill was impressed by the way the actor could raise an eyebrow and immediately clue us in to who was going to speak next, while director Andrew Twyman gives Marrs specific parts of the set to sit or stand in depending on what character he's playing. 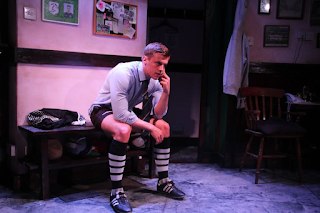 Coming a year after the excellent, similarly-themed Crouch, Touch, Pause, Engage, Odd Shaped Balls does suffer a bit in the comparison - some of the characters here, especially the Welsh team-mate whose well-intentioned attempts to be relaxed around Jimmy's sexuality keep veering towards the offensive, feel like slightly more generic versions of their counterparts in the verbatim play. And Jimmy's uniformly aggressive approach to anything related to his enforced coming-out does get tiresome after a while. 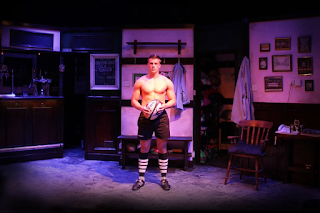 But that anger is at least coming from an interesting place, as Jimmy is still very young and Sheridan is keen to avoid pigeonholing his sexuality too early: Part of the character's frustration is down to having to make public statements about how he feels when he hasn't figured it out himself yet. Odd Shaped Balls maintains a light touch, and although I could have done with a more careful look at macho culture within the sport - the individual nasty fans seemed plausible, but the whole stadium taking up a homophobic chant within days of the news breaking seemed more like football than rugby fans to me - the moments of comedy are well-done and welcome (Tom Daley's Union Jack cushion a nicely observed detail.) Marrs certainly seems like a talent to watch too, both as actor and as eye-candy - Twyman's production seems happy to keep him in the same rugby shirt regardless of where his character is for the story, so the fact that he changes it a couple of times to reveal a ridiculously buff torso is pleasingly gratuitous - THIS IS HOW YOU DO PUBLICITY SHOTS, 2016!

Odd Shaped Balls by Richard D. Sheridan is booking until the 25th of June at the Old Red Lion Theatre.