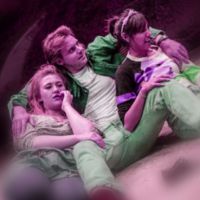 The Royal Court run of Rita, Sue and Bob Too has turned out to be Schrödinger’s Play – for a while it was simultaneously happening and not happening. Vicky Featherstone cancelled the London performances when the subject matter seemed a bit too close both to the revelations of sexual harassment in the theatre industry in general, and by the production’s original co-director Max Stafford-Clark in particular. She was persuaded to change her mind on the basis that the play could help illuminate the issue, as well as the irony that it was a female playwright – Andrea Dunbar wrote the play when she was 19 – who wouldn’t be heard. So Out of Joint’s touring production, now directed solely by Kate Wasserberg, gets to bring 1982 Bradford to 2018 London for three weeks and show 15-year-olds Rita (Taj Atwal) and Sue (Gemma Dobson) spend their Friday night babysitting for a local couple.

27-year-old Bob (James Atherton) offers to drive them home but instead takes them to an isolated road by the moors where he seduces them, having sex with both girls in turn; this becomes a regular weekly event. 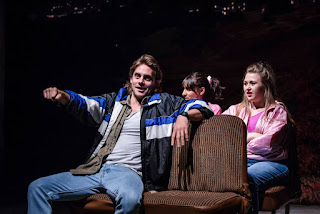 The play does of course have a lot to say about sexual politics, and the way men have taken advantage of younger women over the years has its roots in this history of entitlement. But it’s much more literal politics that Dunbar is really looking at, the early years of Thatcher’s Britain – a character’s confidence that she’ll never get re-elected having a different ring now than it would have had then – getting an unforgiving look. Bob’s predatory status is only really touched on by his wife Michelle (Samantha Robinson,) who’s worried he might be sleeping with one of the underage girls, not realising it’s actually both of them. But despite already having a wife and two kids, barely holding down a job and possibly having to sell his car, Bob is seen as a genuine catch by the two girls. 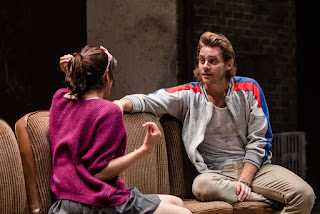 It’s a sign of how limited their prospects are that sharing him behind Michelle’s back is about as good a future as they can imagine. Dunbar’s seminal play (literally, there’s quite a lot of semen in it) is effective because it largely plays out as a black comedy, the opening scene of sex in Bob’s car making for a farcical start, but although there’s still snappy exchanges as the story continues it gets bleaker, culminating in an ending where one of the women becomes demonised by the others as it’s easier to go through life with a single villain to blame. 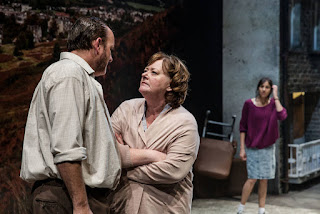 Tim Shortall’s set is dominated by an aerial photo of the town, with tower blocks looming either side of the stage, but the action is actually done much more simply with four car seats rearranged to create all the locations. The cast also includes a memorable turn from Sally Bankes as Sue’s Mum, the archetypal formidable Northern woman with her hair in curlers, and everyone contributes to a breathless pace. Perhaps too breathless – I’m not often one to complain about a short running time but Wasserberg’s production does at times feel as if it’s rushing through the action. It’s effective overall though, and its relevance to current politics both sexual and wider means it belongs back at the Royal Court right now.

Rita, Sue and Bob Too by Andrea Dunbar is booking until the 27th of January at the Royal Court’s Jerwood Theatre Downstairs; then continuing on tour to Huddersfield, Mold and Glasgow.