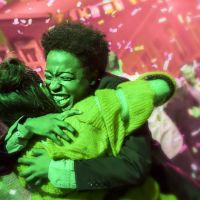 The Young Vic gets its first new artistic director in nearly twenty years as Kwame Kwei-Armah debuts in carnival fashion with a show first seen in New York two years ago: A musical adaptation of Twelfth Night. Kwei-Armah heavily edits Shakespeare’s text, something made easier by the inclusion of Shaina Taub’s original songs, whose modern-language lyrics help summarise and move on the story so that the whole thing comes in at well under two hours. Originally set in New Orleans, Kwei-Armah and Oskar Eustis’ production has been relocated to Notting Hill for its UK premiere, with Robert Jones’ thrust stage creating a long road where Viola (Gabrielle Brooks) is washed up after a storm, right into a funeral – but a lively one that turns into a street party, only the deceased’s sister Olivia (Natalie Dew) keeping up the mourning for long. It’s too long for Duke Orsino (Rupert Young,) who’s determined to woo her despite her obvious lack of interest.

Disguising herself as a man (one of Taub’s additions explains this by saying Orsino doesn’t employ women, although this makes him problematic in entirely new ways,) Viola soon becomes the Duke’s most trusted servant and is sent to do his wooing for him, only for Olivia to fall for her alter-ego. 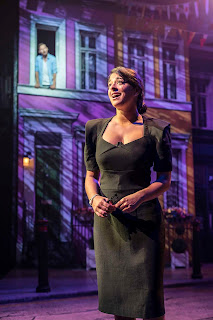 The re-write and production offer a simple but sweet telling of the central romantic confusions between these three and Viola’s missing brother Sebastian (Jyuddah Jaymes,) but the real energies have been spent on the gulling of Malvolio, who in Gerard Carey’s Segway-riding portrayal is more pompous than priggish, his musical numbers making it clear his interest in marrying his mistress is more about social climbing than any actual affection. Although the frantic and silly action means everyone’s very much playing things for laughs - no clichés here about this being Shakespeare's melancholy farewell to the early comedies - the Malvolio plot is the comic heart of the musical, and costume designer Brigitte Reiffenstuel even offers a rare non-literal interpretation of his yellow stockings and cross-garters which works well with the modern setting. 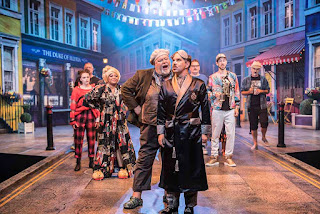 Taub’s songs are energetic and largely catchy, but they’re also surprisingly old-fashioned in the context: They take in influences from Broadways musicals from its golden age right up to the Rent, with jazzy moments, a Burt Bacharach feel to Feste’s (Melissa Allan) big belting number, and even a pastiche of 1980s sports movie anthems in the buildup to Viola’s fight with Sir Andrew (Silas Wyatt-Barke.) What isn’t there is much R’n’B, any hip-hop or even rock – of course the fact that this took me by surprise says less about Twelfth Night itself than it does about the new musical landscape at the moment, and once I’d acclimatised to the fact that this was going to take its inspiration elsewhere I was able to settle into the show’s rhythm. 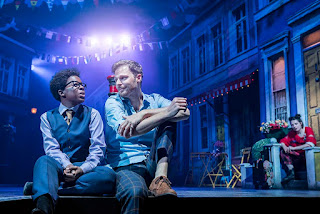 The Young Vic has for some time been fond of using a community chorus of unpaid extras, and this doesn’t look like it’ll change any time soon: A particularly big chorus is used to fill the stage for the carnival feel, handing out jerk pineapple chunks before the show (they swore blind there’d been actual jerk chicken in there at some point but there was a school party in front of us so that was long gone) and swelling out the crowds. But many of them are also given a lot more responsibility, providing backing vocals and dance numbers, and while there’s obviously a lot of talent – a couple are almost indistinguishable from the professionals - their abilities are inevitably mixed, which means some of the bigger numbers have a hint of the amateur dramatics about them. 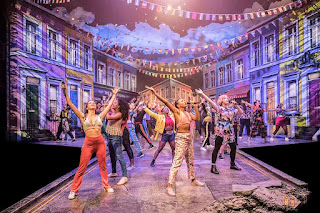 But these are just occasional moments that jar with the production’s overall impetus. The professional cast are very strong, with Brooks and Allan in particularly powerful voice, and Gbemisola Ikumelo having fun with the often scene-stealing role of Maria (although, as usual, the idea that she ends up marrying Martyn Ellis’ croc-wearing Toby Belch seems more of a punishment than a reward.) As a musical this doesn’t reinvent the wheel but if Kwei-Armah wanted to launch things with a party he’s succeeded.

Twelfth Night by William Shakespeare, Shaina Taub and Kwame Kwei-Armah is booking until the 17th of November at the Young Vic.