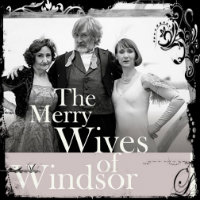 Despite being a spin-off for one of Shakespeare’s best-loved characters, The Merry Wives of Windsor’s main claim to fame is a highly dubious story about Queen Elizabeth I wanting to see “Falstaff in love” (which if it were true would surely have seen Shakespeare at the very least spend some time in the stocks because love… ain’t really what Falstaff’s in here*.) Not that the play’s one of the harder comedies to get a laugh out of, but it’s rarely one of the big hitters either. Now Elle While’s production for Shakespeare’s Globe comes along to make a solid case for this proto-sex farce as, if far from the subtlest of comedies, one that can deliver reliable laughs all evening. It doesn’t hurt that While has brought back, from last year’s rep company, someone whose name in the casting announcement instantly makes a production a must-see: Pearce Quigley plays Sir John Falstaff, the viciously amoral but strangely likeable knight from the Henry IV plays.

The main plot kicks off when Falstaff sends identical letters attempting to seduce both Mistress Page (Sarah Finigan) and Mistress Ford (Bryony Hannah,) not realising that the two of them are friends and will soon be comparing notes. 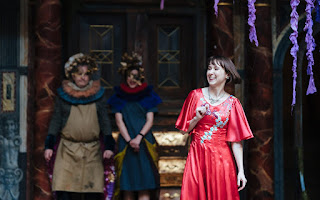 The result is the pair repeatedly tricking Falstaff into fake assignations that end with him being humiliated, and which he falls for every single time. Meanwhile Frank Ford (Jude Owusu) gets wind of what’s going on and, not realising his wife’s playing a trick, goes into a spiral of jealousy, while George Page (Forbes Masson) is too busy trying to marry off his daughter Anne (Boadicea Ricketts) to notice any of it. In some ways this subplot feels rushed through, but not particularly to its detriment: The question of whether Slender (Joshua Lacey) or Caius (Richard Katz) will get Anne’s hand is never in much doubt when she’s clearly only got eyes for Fenton (Zach Wyatt.) 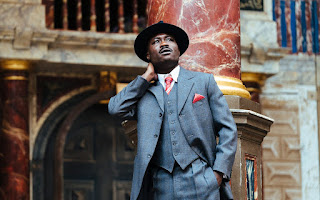 What it does add to the evening is more opportunities for comic misunderstandings and disastrous attempts at fights, and while Shakespeare’s comedy foreigners are generally a dubious proposition Katz makes the French Dr Caius a highlight; in retrospect it’s surprising I’ve never heard his “by gar!” catchphrase pronounced quite the way Katz does. But this is all part of what very quickly got me on-side with While’s production, the fact that it feels every tiny opportunity for a joke has been grabbed. A few of these are clean – Mistress Page needing to hold the letter at arm’s length to read it got a big laugh – most of them are decidedly not. 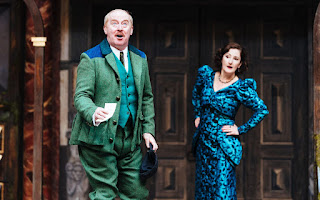 Again, actors illustrating any vaguely sexual line by grabbing either their crotches or imaginary boobs is a bugbear of mine, but here it’s just so relentless and shameless that it works. This isn’t “here’s what this line means in case you didn’t understand it,” it’s “yeah, this is basically all filth because Shakespeare.” If The Merry Wives of Windsor is a spiritual ancestor to the Carry On films then While and her cast have embraced this and run with it. It’s a tricky thing to get right without it seeming sleazy but even in the current climate it doesn’t feel uncomfortable, probably because Quigley’s Falstaff so resolutely seems to be in the whole thing for the mischief of it all rather than anything sexual. 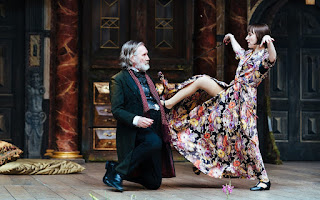 And of course he sets the tone for the whole production; I’m not sure I’ve ever seen Pearce Quigley play anyone other than Pearce Quigley, any more than I have any idea why you’d ever want to. As ever he has the audience in the palm of his hand with his trademark, laidback to the point of comatose delivery, treatment of the script as a suggestion at best, and utterly casual delivery of cracking gags both verbal and visual. He manages to make a spit-take into a genius running gag (while suggesting that performing with James Garnon in last year’s ensemble has made a certain attitude towards the groundlings rub off on him.) 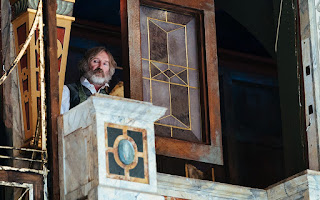 The Edwardian setting of Charlie Cridlan’s design makes for an excuse for the cast to jump into a Charleston at any given moment, Frank Moon’s brass-heavy music playing a major part in the production’s charm. And charm is definitely the order of the day for all that this is essentially a sex farce; everyone’s unwavering determination to make the audience smile is infectious, and this is a couple of hours of steady chuckles with the next big belly laugh never too far away.

The Merry Wives of Windsor by William Shakespeare is booking in repertory until the 12th of October at Shakespeare’s Globe.

*even “Falstaff in lust” is a bit of a stretch as he generally seems much more excited by the idea of getting one over on the husbands than actually sleeping with the wives
Posted by nick730 at 23:11