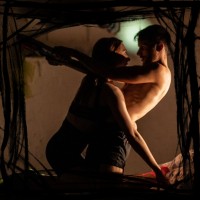 It's hardly a fresh observation to say Americans have a uniquely odd, unhealthy relationship with guns; so it says something about Sarah Kosar's new play that she's found a new and disturbing twist on the subject. Armadillo follows three people in their late twenties who've grown up in families where firearms were seen as essential, to the point of fetishisation. For newly-married Sam (Michelle Fox) and John (Mark Quartley) the fetish has literally become sexual - they use loaded guns as foreplay, until an accident six months into their marriage leaves Sam with a gunshot wound in her arm. Realising that it's not just dangerous but an addiction, John comes up with a regime for them to give up having guns in the house. For a while they seem to be managing it, except for the fact that gunplay was so tied up in their love life that Sam can't have sex without it.

But soon two factors return to Sam's life that make her start jonesing for guns and bullets: First up her drug-dealing, emotionally stunted brother Scotty (Nima Taleghani) arrives needing to crash on their sofa. 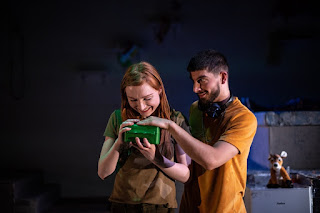 Ignoring their requests to keep the home gun-free, Scotty hides them all over the house, tempting his sister with bullets. Meanwhile there's a stark reminder of the reason the siblings find comfort and obsession in weapons: As a 13-year-old, Sam was abducted by a paedophile, and later rescued by a "good guy with a gun." Now another teenage girl has gone missing, and with the local news wanting her point of view as a survivor, she's forced to relive it. John is increasingly left out in the cold as Sam and Scotty revive their childhood coping mechanism, of reenacting moments from the kidnapping but with happier outcomes. 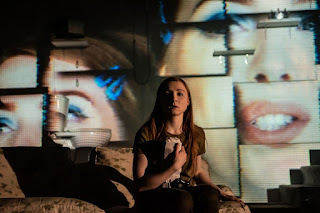 Weirdly, the opening setup of a couple using loaded guns as sex toys wasn't particularly disturbing to me - I guess enough celebrities have died of asphyxiwanks gone wrong that my brain could rationalise it as a different version of that, even if I don't personally understand it. But as Kosar delves deeper into the psychology behind what caused the fetish, the play gets increasingly uncomfortable to watch (though lighter moments, often coming from Taleghani's dangerous but slightly ludicrous Scotty, stop it from becoming too bleak an evening.) 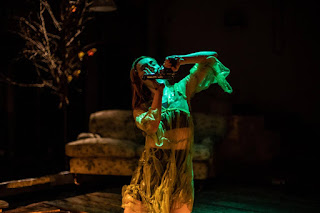 Kosar's story is linear but director Sara Joyce tells it in disjointed ways to unsettling effect: So scene changes are abrupt, Ash J Woodward's video of the ongoing news cycle around the disappearance is an oppressive intrusion on the back wall, and Jasmine Swan's multilevel set liberally mixes the literal with the metaphorical (the front row may get wet; but enough about the scenes of Mark Quartley in his underwear, there's also a pond downstage that Sam splashes about in.) The colour-coding of each character's costumes (green for Sam, pink for John, yellow for Scotty) may have had a significance that was lost on me, and the frequent flashing of Jessica Hun Hang Yun's lighting bordered on being too much, but I really liked the way Anna Clock's sound design threw together very different songs and sounds in a discordant way. It all adds up to something that puts you on edge and makes the play feel increasingly nightmarish without being able to put your finger on why. The first time Sam cradles and soothes a gun like a baby it's funny; the second time it's disturbing. 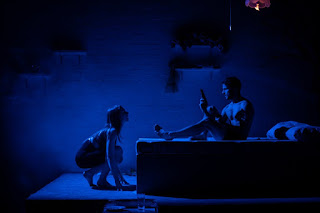 Armadillo also features one of my favourite endings in a long time, in literally the last couple of seconds of the play. Without giving anything away, it builds anticipation, subverts it, then sends you away thinking you might just have got something darker even than what you were expecting. Ultimately, as an exploration of America's relationship with guns in general this doesn't work, as the psychology it delves into is too specific. But then that doesn't seem like it was ever the intention: Armadillo is nightmarish in a good way, the kind of nightmare you don't quite understand but try to get your head round for days afterwards.

Armadillo by Sarah Kosar is booking until the 22nd of June at the Yard Theatre.