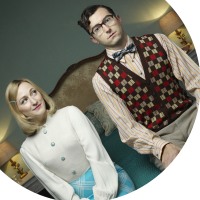 I've more or less consigned Emma Rice to the same "I'm just never going to see the appeal" box Samuel Beckett has been sitting in, for more or less the exact opposite reasons, for years. But anything resembling live theatre is still a rarity, and Romantics Anonymous is a show that's inspired a lot of love among people whose opinion I consider worth listening to. It debuted at the Swanamaker at the tail end of Rice's notorious run at Shakespeare's Globe, and after playing at the Bristol Old Vic earlier this year it's now returned there to play to an empty theatre with the live performances streamed to computers (the platform they use, TicketCo, turns out to also have an app that works on my TV so that was better than expected.) Based on Les Émotifs Anonymes by Jean-Pierre Améris and Philippe Blasband, Rice (book,) Michael Kooman (music) and Christopher Dimond's (lyrics) musical plays out the familiar French movie trope of quirky misfits finding love.
What connects them in this instance is chocolate: Angèlique (Carly Bawden) is so socially awkward she faints if she has to speak to more than one person at once; but she's so desperate for work she takes a job as a saleswoman for a failing chocolate firm. 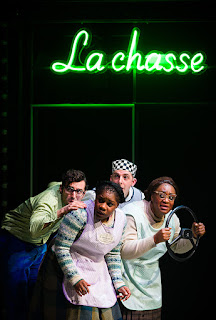 It turns out owner Jean-René (Marc Antolin) is so risk-averse that he hasn't changed the family recipe for decades, despite the fact that it's resulted in a reputation for mediocrity and lost the firm all its sales - even the one remaining loyal customer (Gareth Snook) gives them an ultimatum of producing something new or losing her custom. Angèlique offers to find a legendary, reclusive master chocolatier to help them relaunch; Jean-René's staff (Me'sha Bryan, Harry Hepple and Sandra Marvin) immediately spot what he can't, namely that the mysterious chocolatier is Angèlique herself. They're also quicker than either of them to spot that the two have fallen in love at first sight. 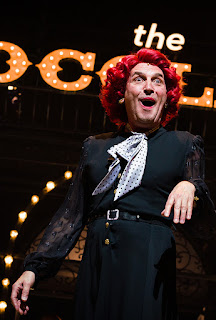 I can see the appeal of Romantics Anonymous more than I can most of Rice's Kneehigh/Wise Children shows: There's a charming ensemble quick-changing their way through Lez Brotherston's arch designs, and the songs are largely good foot-tapping numbers that make a strong first impression. Unfortunately I also found that my usual criticism, that Rice aims a whimsy gun at the stage and shoots indiscriminately, holds true once more; one of a number of heavy-handed metaphors might be that what makes chocolate special is the hint of bitterness under the sweetness, but apart from the idea that a relationship between two such passive characters will be a difficult one, there isn't much bitterness under the sweetness of the show. 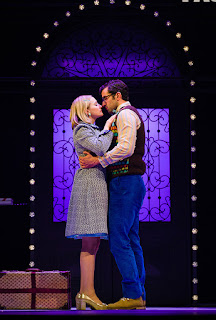 And then of course there's the fact that the central characters are so similar, and so passive; it says something when the character who passes out at the thought of social interaction is the dynamic half of the couple. The lack of any live audience in the theatre doesn't help with the atmosphere, of course - for a light show this is pretty low on actual laughs. I probably sound more down on the show than I actually felt watching it - Romantics Anonymous was a perfectly pleasant couple of hours on a Friday evening, but while Angèlique's chocolates come in dark, milk and white, the show itself doesn't offer quite as much light and shade.
Romantics Anonymous by Michael Kooman, Christopher Dimond and Emma Rice, based on Les Émotifs Anonymes by Jean-Pierre Améris and Philippe Blasband, is streaming until the 26th of September from the Bristol Old Vic, with captioned and audio described performances available on demand on the 28th.
Running time: 2 hours 15 minutes including interval.
Photo credit: Steve Tanner.
Posted by nick730 at 23:13