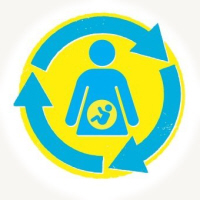 I know people who were hoping to skip the Royal Court's Weekly Rep season (when you're a theatre geek there's enough shows to keep up with without one venue launching a new one each week) but had to relent and book a couple of shows when they saw the quality of the ensemble. And this cast (who it's hard to believe were in their first public performance after only a week's rehearsal) are once again saving an evening that could have gone very differently in the penultimate show of the season, Untitled Matriarch Play (or Seven Sisters.) And a lot of the time Nikole Beckwith's work is as bizarre as you'd expect from a play that has an alternate title despite not having a first title. Also, there's seven women in the cast and most of their characters are related, but only four of them are sisters.

There is a matriarch though. Lorraine (Siobhan Redmond) has four daughters ranging from 35-year-old Karen (Debbie Chazen) to 15-year-old Beckah (Farzana Dua Elahe,) and she's invited them all round to make an announcement: At the age of 54 she's having another baby, using surrogate Sera (Angela Terence.) And this time she's ensured it's going to be a boy.

Nikole Beckwith's play is about women, but more than anything it's about age. Every one of the women is the "wrong" age in her own opinion or someone else's: Her daughters feel Lorraine is too old to raise another child; Beckah feels too young to be allowed to enjoy her life. Karen is being told she's left it too late to find a man and have a child of her own. The performers all have great comic moments, with perhaps the funniest coming from Natasha Gordon and Laura Elphinstone as Mimi and Claire, vying to be considered the middle child so they can claim the associated hangups. Mimi is utterly self-absorbed while Claire is a mass of nerves, neuroses and allergies. Anna Calder-Marshall as Lorraine's mother Grandma Sylvie also delivers scene-stealing non-sequiturs from her wheelchair, and has thoughts of her own about her daughter and granddaughters' issues with age.

Where the play slips up is in any attempt to find a consistent tone: Its oddness is at times endearing (like a scene featuring a horribly inappropriate piñata at a baby shower.) At others, like a scene that breaks the fourth wall in a way completely at odds with the rest of the play's mood, it's frustrating. Coupled with a rather bloated script that could have done with a major trim, this is, as is becoming a theme with these weekly rep plays, a bit of a curate's egg: Plenty of excellent moments and performances in the middle of something that isn't quite satisfying. Given that director Vicky Featherstone isn't claiming responsibility for this "Open Court" season, and the short preparation time, we can't infer anything about how she'll run the Royal Court from this. But despite it being famously a writers' theatre with little director interference into the scripts, I hope she'll be showing a firmer hand with pieces that almost work, but don't quite.

Untitled Matriarch Play (or Seven Sisters) by Nikole Beckwith is booking until the 13th of July at the Royal Court's Jerwood Theatre Downstairs.