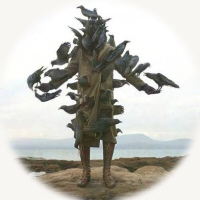 It's not something that I can say very often, and it can only happen a handful more times, but here's a Shakespeare play I'd never seen before until tonight. Shakespeare's first tragedy and one of the plays that made his name, Titus Andronicus was a huge success but one that had already gone out of fashion in the playwright's lifetime and, unlike some, has never really regained its popularity in the ensuing centuries, still often dismissed as juvenile. It's hard to argue that it's one of the better pieces in the canon, its plot a pretty straightforward cycle of revenge and counter-revenge that glories in violence and gore, but Michael Fentiman's new production in the Swan revels in the opportunities the play presents and certainly proves that it can still make for a hugely entertaining night at the theatre, and perhaps one with the odd moment of depth as well.

Titus (Stephen Boxer) is a Roman general who's just won a huge victory against the Goths, though losing many of his own sons in the process. He's captured the Goth Queen Tamora (Katy Stephens) and her sons, and marks the end of the battle by sacrificing the eldest to the gods. But when Titus nominates Saturninus (John Hopkins) to be the new Emperor, Saturninus is smitten by Tamora and marries her. Now that a woman with a grudge against Titus is Empress of Rome, she and her remaining sons begin a campaign of revenge to rob him of the children he has left as well. 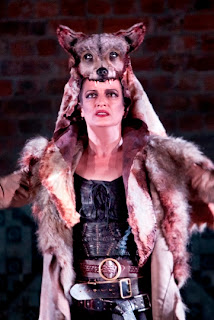 This is a very strong ensemble cast but it's hard to keep your eyes off Stephens' glorious Tamora (and not just because of her procession of outrageous hairdos and headgear,) gleeful in her new power and smiling her assurances that she's put the past behind her right in the face of a man who knows it's a lie. Tonight she also dealt with a mishap without batting an eyelid, as a wardrobe malfunction left her pinned to the stage and she took it in her stride, growling her next line in the front row's face as she disentangled her dress from the floor, her character's trademark wild grin still on her face. (This wasn't the only technical glitch the cast sailed through tonight - when Harry McEntire's Mutius meets an early end, the spectacular exit clearly planned for his body didn't quite work out so he was carried off as if nothing was wrong.) 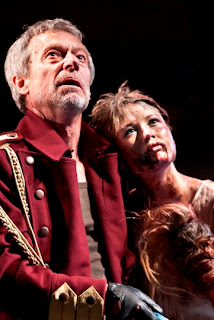 You could probably point at Titus' changing personality as a sign of this being the work of an inexperienced playwright but to his credit Boxer plays it as if he's Hamlet or Lear: Something snapping in him when his sons Quintus (Joe Bannister) and Martius (Ciarán Owens) are framed for the murder of the Emperor's brother (Richard Goulding) and executed, but he plays a finely tuned balance between the real hints of insanity, and Titus' understanding that he's not quite in his right mind while playing up the madness to trick his enemies into falling for his revenge. 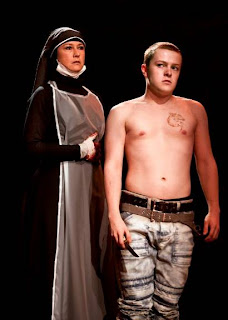 Balance is also the key note of Fentiman's production which, although the stabbings are disappointingly bloodless, makes up for it by going full grand guignol for the more elaborate and grotesque killings. One of the perceived problems with Titus Andronicus in the present day is that it's so over-the-top that it takes a lot to make an audience take it seriously. Fentiman deals with this by anticipating the laughs and encouraging them, but he never strays too far into turning the tragedy into farce. Instead this is a dark story where humour is always hovering in the background, the mood set up by the opening tableau of Titus' dead sons laid out in state, only for a nun to turn the radio on and light a cigarette. The most consistent source of this sense of the ridiculous is John Hopkins' excellent Saturninus, who after seeming fearsome when competing with his brother for the throne, upon becoming Emperor finds himself slightly out of his depth, a ridiculous figure of a man with all the power in the world and no dignity (his first appropriation of the Royal We on becoming Emperor is priceless) and trying to deal with affairs of state from his bath. 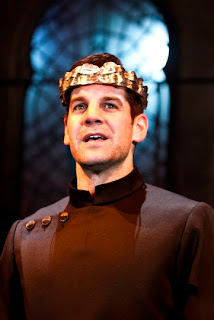 With this finely-tuned mood established, the production is able to approach the ensuing extreme violence in a variety of ways. The grotesque rape and disfigurement of Rose Reynolds' Lavinia, at first an almost parodic vision of Aryan beauty, isn't really a scene to be made fun of and indeed she gives a haunting performance, an added layer of body horror in having her hair cut off and used to bind the bloody stumps where her hands used to be. (Although after the interval we return to a scene of the darkest humour as we see what happens when a woman with no hands tries to eat a boiled egg.) The revenge on her attackers, though, is a much more gleeful affair: Tamora's sons Chiron and Demetrius (Jonny Weldon and Perry Millward) are a pair of dim-witted, bicycle-riding1 bovver boys who meet their sticky end hanging upside-down from the rafters before becoming the main course in the play's infamous climactic banquet. 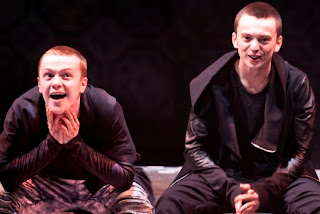 Another element of the play that's hard to reconcile with the 21st century is Aaron the Moor, Tamora's lover: Unlike some of his surprisingly sympathetically-viewed minorities later in his career, Shakespeare is here definitely writing a character as seen by his time's prejudices, a man as black on the inside as he is on the outside, who glories in his villainy (though I was most interested by the fact that, even if he is a villain, Shakespeare would have included a character who is so avowedly an atheist.) Kevin Harvey certainly grasps this opportunity with both hands, although perhaps because of his unusual accent (it sounded mostly Liverpool but with hints of other Northern accents and the odd random bit of Sean Connery thrown in) that's not always easy to understand I didn't feel like he was quite the Iago figure he could have been. (But his gag that's essentially a "yo mama" joke is perfect, and remains surely one of Shakespeare's most modern lines.) 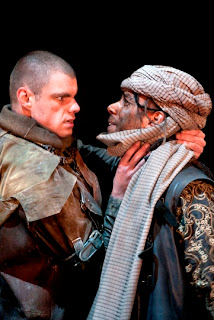 There's strong support from Matthew Needham as Lucius, the closest thing to a hope for a brighter future but still a brutal presence (the play's final image suggests its lessons have not been learnt) who's at the centre of a heart-stopping sequence to take us into the interval, powered by the drums of Tom Mills' sound design; and Richard Durden as Titus' ever-suffering older brother Marcus. Fentiman's production doesn't suggest Titus is a misunderstood masterpiece, but instead it understands it perfectly: It's a play that doesn't take itself all that seriously, even if its characters absolutely do.

Titus Andronicus by William Shakespeare is booking in repertory until the 26th of October at the Swan Theatre, Stratford-upon-Avon.

1you'd have thought that, as Assistant Director on Rupert Goold's Romeo and Juliet, Fentiman would recall the risks of having your actors ride bikes on an RSC thrust stage
Posted by nick730 at 22:49