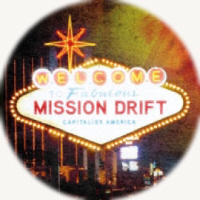 A play that looks at American capitalism through characters from the nation's early history sounds like a worryingly familiar prospect, but fortunately Mission Drift isn't another Low Road. Unfortunately I'm not quite sure what it is instead. The latest guests in the National Theatre's Shed are US company the TEAM, whose play charts the rise and fall of the American Dream in Las Vegas: Known for its resorts and casinos, it's also a place where everything is transitory. The famous buildings where Elvis and Sinatra played are regularly destroyed in controlled implosions to make way for the next biggest, most expensive hotel, which will in its turn become a relic sooner rather than later; the only reminder of past glories the signs saved and exhibited at a tatty museum called the Neon Boneyard.

The company have taken inspiration from the real-life Dutch couple Catalina (Libby King) and Joris Rapalje (Brian Hastert) who settled in what was then New Amsterdam aged 14, and went on to have many children - to date a million of their known descendants have lived in the USA. The play's conceit is to hang this legacy of Americans onto the original couple themselves: Remaining 14 forever, they live in and explore the American frontier for four centuries, settling in Las Vegas where they build a business empire. 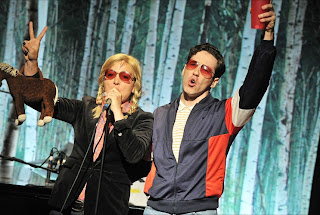 At the same time we see a modern-day pair reaping the consequences of their actions: Chris (Ian Lassiter) is of Native American descent and lives in an isolated home in the desert; the city's expansion eventually surrounds him and he finds himself an unwilling Las Vegas citizen. And Joan (Amber Gray) works in one of the Rapaljes' casinos and is hoping for promotion when their next venture opens. Instead the market crash sees them lay her off along with hundreds of others. The stories are accompanied by songs from desert cabaret artist Miss Atomic (Heather Christian.) 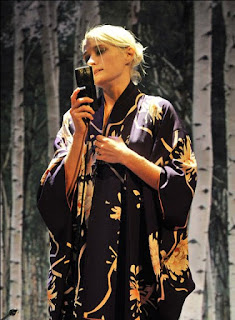 The performances are good but although the actors are putting a lot of energy into the show, it doesn't necessarily translate. Perhaps this is because although the musical accompaniment really is excellent, the songs all tend towards the mournful and soporific. The play has the constant feel of winding down, even from the start, which makes it seem longer than it is (and it's already longer than it needs to be.) And the various themes the company explores never really gel - Nevada's other claim to fame as an atomic testing ground is regularly referenced but feels like a diversion from what narrative there is. The company deliver a few very powerful, mournful images of waking up from the American Dream to a sobering reality, but there's rather too much of this, meaning they lose their individual power.