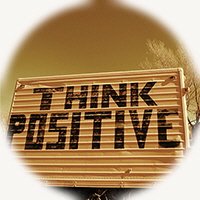 Ending this year's RSC summer season is the culmination of Mark Ravenhill's two-year residency in Stratford-upon-Avon, his response to Voltaire's Candide. Not an adaptation - in fact the production seems to presuppose a certain amount of familiarity with the original, as evidenced by a letter sent out a few months ago suggesting audiences might want to read or re-read the book before coming. Perhaps cottoning on to the fact that people don't usually expect to do homework before seeing a show, Ravenhill has also provided a bite-sized retelling of the story on Twitter1 while the RSC website gives a graphic novel summary. The story itself is of a man taught to be optimistic in the face of disaster, who has this philosophy tested when he's kicked out of the castle he grew up in, loses his beloved, gets caught up in numerous wars and spends a life surrounded by death, pain and unfairness.

Ravenhill's play opens with a retelling of this story, which soon gets derailed by new mishaps and adventures. A Countess (Ishia Bennison) discovers Candide (Matthew Needham) at the end of his travels, a broken man. In a misguided attempt to get into his pants, she stages the events of his life so far for him. But seeing his beloved Cunegonde (Rose Reynolds) lost from him again only upsets Candide more, and he interrupts the play-within-a-play to seek his next chapter. 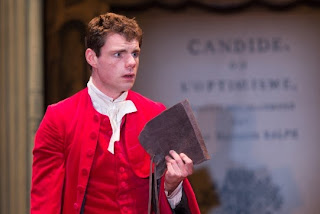 From here on Ravenhill weaves two stories together: We meet another, modern-day troubled soul, Sarah (Katy Stephens.) The only survivor of a massacre, her own trials and tribulations make her obsessed with Candide's story - until finally the two threads meet. 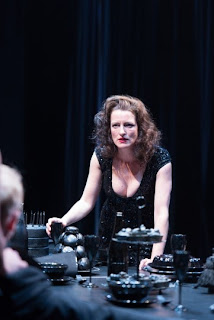 The play has five distinct scenes: After the aborted Voltaire playlet, we go to the birthday party of the teenaged Sophie (Sarah Ridgeway,) who has concerns about global overpopulation, and a particularly hands-on plan to help combat it. It's an interesting piece of black comedy (literally, in Soutra Gilmour's striking design where even the jelly and cakes are black) that includes Harry McEntire as Sophie's brother giving a 21st century version of the Seven Ages of Man speech. Later, Sarah will try to re-write her part in these events together with a scriptwriter2, and they'll come up with their own take on Panglossian philosophy of "Everything is for the best in the best of all possible worlds," namely "Shit happens, then you get over it3. 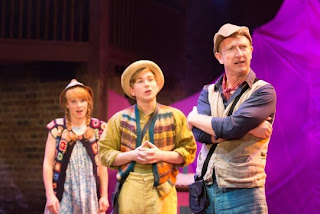 When we next see Candide a tornado has blown him into the completely isolated village of Eldorado. Faced, finally, with a place where everything actually does appear to be for the best, Candide can't cope, and even manages to infect a local (Steffan Rhodri) with some of the individualism of the outside world. 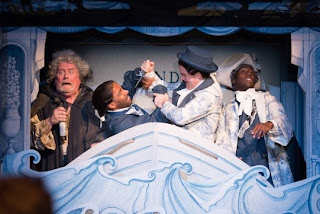 The play makes a good case for Candide's relevance in a time when people are still being told to put up with hardships because this is as good as it's going to get. Written with this Swan ensemble in mind, the cast are the reason to see it, making the most of the material in Lyndsey Turner's energetic production, with catchy songs from Michael Bruce. There are moments that really stand out, from the sophisticated - the multiple levels of story-within-story - to the very silly - Candide escaping Eldorado suspended from balloons and propelled by sheep-farts. But the whole wasn't as memorable as the sum of its parts for me. 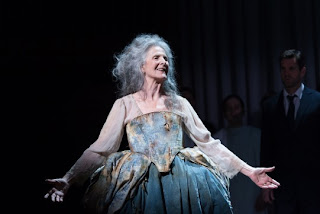 Candide by Mark Ravenhill, inspired by Voltaire, is booking in repertory until the 26th of October at the Swan Theatre, Stratford-upon-Avon.

1I'm pretty sure this was meant to have got to the end of the tale by the time the show opened, but at time of writing Candide's online travels were still going on.

2I suspect the writer's coke-fuelled ravings about Shakespeare are pretty much how I come across when I'm under the influence of nothing stronger than a latte.

3It's a great scene, but it was still stolen for me by a rather genius cardboard cut-out of Ciarán Owens.
Posted by nick730 at 20:48