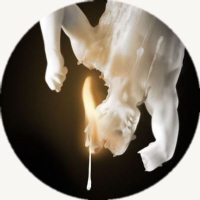 Some shows generate a Marmite buzz right from the first preview, and that was definitely the case with the National's new Edward II, right up to the official reviews, which ran the gamut from one star to five. Described as "rarely-performed," I've actually seen Marlowe's play twice before, albeit in zero-budget fringe productions, and I've found it to be the strongest of his plays that I've seen. So I didn't see playing it on the National's biggest stage as a particularly big risk, and surely whatever you think of this production the play itself comes out of it very well. Having been a "rising" stage name for ages, John Heffernan finally gets top billing as Edward, the newly-crowned king whose first act is to recall from exile his lover Gaveston. Hated by the court, and distracting the king from the small matter of war with Scotland, Gaveston's presence inspires the barons into all-out rebellion against Edward.

With Lizzie Clachan's set exposing its workings, Alex Lowde's costumes mixing the period with the contemporary, and the action sometimes leaving the stage entirely to be filmed from the wings and around the building, this is the most self-consciously Brechtian staging - complete with scene captions - to make its way to the Olivier since Deborah Warner's Mother Courage. For his first job at the National director Joe Hill-Gibbins clearly hasn't been given the biggest budget but he makes use of everything at his disposal and is clearly brimming with ideas. 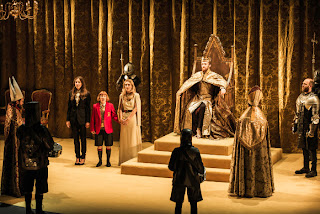 This chaotic approach is one Hill-Gibbins brought successfully to The Changeling last year, but then that's a rather messy play even before you throw trifle at it. Edward II I find much stronger, and though approaching this with an open mind I did have my concerns that the fireworks might get in the way of the storytelling. Fortunately this is far from the case. Not everything works, certainly, but the wealth of ideas on show undoubtedly feeds into the unstoppable energy exhibited by everyone involved, which propels what could become a dry tale of a disinterested king forward into a crazy fight for power. 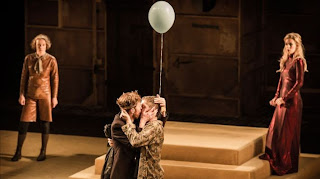 My main issue with Hill-Gibbins' throwing of everything but the kitchen sink at the stage is that even by the time the interval rolls round none of it's coalesced into a coherent theme. The background actors, referred to here as "dogs," are all leather-clad and wear animal-themed helmets for the entire duration1, which feels suitably mediaeval; but waiting until we're nearly 90 minutes in to acknowledge the outfits' hint of gimp and suggest a slightly S&M kinkiness to the deaths of Spencer (Nathaniel Martello-White) and Baldock (Ben Addis) makes it seem out of keeping with the rest of the production. (It does take a while for just how overt the king's sexuality is to be established as well, although at least this is for good reason: No modern audience will have doubts as to what's going on when the king showers his "best friend" with gifts and seems curiously uninterested in his attractive wife, but when we finally see a prolonged kiss between Edward and Gaveston on the latter's second return from exile, it feels like a deliberate act of defiance against the watching nobles.) 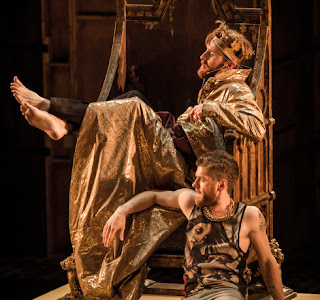 Where the creative approach to the text is most successful is in the characters though. The Heff, who's already played one deposed English king although not on such a high-profile stage, is a natural fit for Edward, something of the spoilt child to his tantrums and disinterest in anything other than his playmate. Gaveston is a tricky character, it's often hard to see why he has such a hold on the king, but Kyle Soller is an inspired choice, and not just because of the incredibly tight jeans which, from the third row of the stalls2, leave you feeling very familiar with parts of Soller's anatomy. You can't quite see his religion, but it's a fairly safe assumption that if he is religious, he's thankful in his prayers. 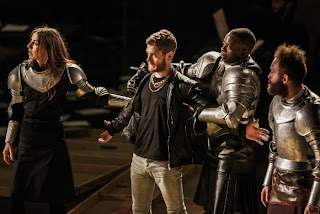 I may have got slightly sidetracked. In any case, Soller's tattooed, chavvy Gaveston certainly has a cocky charm that explains why the king might fall for him, and more importantly he's a particularly good match to Heffernan's take on Edward: He provides the distraction the king wants, both in a very childlike sense of play and in a decidedly more adult one (Gaveston first introduces Spencer to him pretty explicitly as a potential threesome partner.) Soller using his real accent makes a lot of sense as well - having an American be showered with the highest powers in the English court giving an extra slap in the face to the disgruntled barons. After Gaveston's sticky end, Hill-Gibbins re-employs Soller later to good effect for a cruelly ironic piece of doubling. 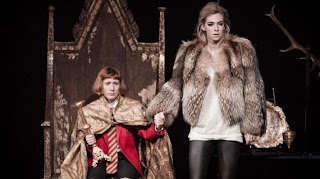 Vanessa Kirby's Queen Isabella is straight out of Made In Chelsea, and I did like the running joke that her son and heir to the throne is largely treated as being there to light her cigarettes and refill her wine glass. Although, and admittedly it's easier to take in as anti-naturalistic a production as this, I still don't like the theatrical cliché of a grown woman (Bettrys Jones) in school uniform being passed off as a young boy. Especially when Kirby picks her up and carries her on her hip, which just looks bizarre. As far as Kobna Holdbrook-Smith's Mortimer goes, he seems to be in the middle of a series of Edward's fears that come true: Although the king accuses his wife of being in love with Mortimer, to start with Isabella genuinely wants her disinterested husband back - it's only his repeated rejection that drives the queen into the charismatic rebel's arms. And, initially restrained in his actions, once put into battle against the king Mortimer becomes the power-hungry monster he was predicted to be. 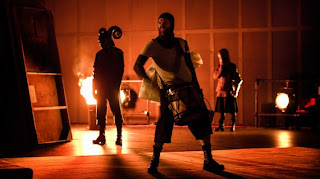 Elsewhere, Kirsty Bushell continues her recent trend of having male roles gender-swapped for her, making an impact as Kent, here the king's sister, buffeted by her conscience and changing circumstance to constantly reevaluate her loyalties. Matthew Pidgeon and Alex Beckett make for particularly vicious rebel lords (and later double as the last word in shifty guards.)

All things told, I found this a powerful and interesting production, whose performances were (as they should be) more important than the bells and whistles with which it was told. Not that taking the risk of those bells and whistles, which have clearly not been to everyone's taste, wasn't worth it. I just wish I could have found a more solid through-line in Hill-Gibbins' approach to the story. I find it fascinating how different interpretations of the play can show the barons' rebellion in different lights - their objection to the king's favourites can be seen as a straight-up homophobic reaction, or in different takes Edward can come off as much less of a victim, and the barons' response against a ruler leaving his kingdom in chaos to go off shagging a reasonable reaction whether his bit on the side was male or female. The scenes of Edward clubbing with his favourites suggest it's ultimately his hedonism in the face of a troubled kingdom that makes him enemies, but I wish this motivation hadn't seemed like a bit of an afterthought. 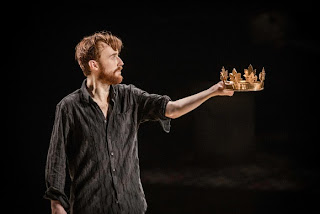 Phill's, somewhat generous I thought, justification for the discordant styles and themes of the first half was that it represented the chaos and confusion of a nation without a strong leader. Personally I thought it represented a director set loose for the first time with a big toybox - but one I'd definitely like to see him invited to play with again.

Edward II by Christopher Marlowe is booking in repertory until the 26th of October at the National Theatre's Olivier.

1a bit of a shame given that, when they finally took the helmets off for the curtain call, most of them turned out to be easy on the eyes. Jack Helsby, I'm looking at you. Of course, given the story they were telling, having more pretty boys around to distract the king probably wouldn't have been wise.


2another bonus of sitting close to the stage is getting to see the picture Gaveston gives Edward to keep around his neck. I strongly suspect it may have been one of Kyle Soller's first-ever professional headshots.
Posted by nick730 at 23:20