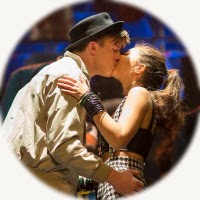 Alongside the Tory Boyz revival, the National Youth Theatre's West End rep season also features two adaptations of Shakespeare tragedies. First up Romeo and Juliet, for which director Paul Roseby uses the abbreviated version Lolita Chakrabarti created for the TV show When Romeo Met Juliet a few years ago. This resets the action from Verona to 1980s Camden Town, and specifically to a market, where the warring families become rival clothes stall holders. To a background of '80s hits performed by the cast, Romeo's (Niall McNamee) professed love for Rosaline goes out of the window when he spots Juliet (Aruhan Galieva.) But he's a Montague, she's a Capulet, and ancient grudge means the match will never be allowed. Being teenagers, elopement followed by double suicide seems to them a perfectly reasonable way out of this predicament.

With Romeo and Juliet not exactly being my favourite Shakespeare, cutting big chunks of it always seems a sensible approach to me, but still the production takes a little while to find its feet, the young actors not quite getting the speech patterns right to start with. 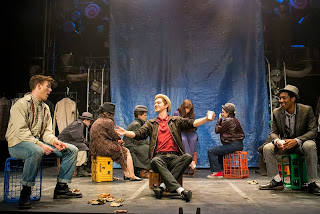 The performers do improve though, buoyed by the arrival of the two most natural verse speakers in the cast: Mercutio and the Nurse can often be scene-stealers and so they prove in the capable hands of Simon Lennon and Abigail Rose, who have a real wit and energy in their performances. Sope Dirisu, too, seems to have great ease in finding the meaning behind the verse, even with the strong Jamaican accent he gives Friar Lawrence. 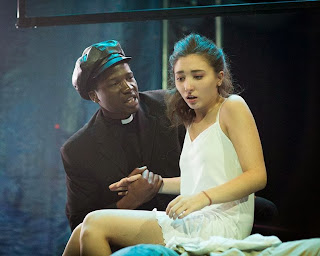 This recasting of the Friar with a knowledge of herbs into a pot-growing Rastafarian is one of a few neat touches in Roseby's production; I also liked the fact that making Tybalt (Sophie Ellerby) female gave the opportunity to have Mercutio unknowingly flirt with the person about to kill him. So a few very promising performers in a production that doesn't always reach the energy levels it could have done with, but does have some memorable moments.

Romeo and Juliet by William Shakespeare, adapted by Lolita Chakrabarti, is booking in repertory until the 29th of November at the Ambassadors Theatre.