For God's sake, let us sit upon the ground, and tell sad stories of split ends and frizz. 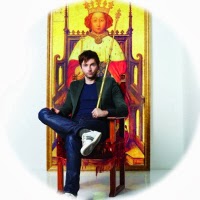 After a year in charge of the RSC, Gregory Doran's first piece of programming finally rolls round, backing up a feeling that star casting is back to stay at Stratford where he directs David Tennant as Richard II. The great-grandson of Edward II, you'd expect family history to have made Richard fully aware that sometimes kings can be deposed, but instead he is steadfast about his divine right to rule, and does so capriciously. Banishing his cousin Bolingbroke is a bad idea, but worse is seizing his property once he's gone, to fund an Irish war. Bolingbroke isn't going to stand for it, and his return to England becomes a fully-fledged revolt. Faced with the fact that his power and even his life aren't as safe as he believed, Richard has to try and maintain both his crown, and the natural lustre and shine of his hair.

Because there's no point ignoring the elephant, or woolly mammoth in the room: Early publicity photos revealed that Tennant's Dick was to be a hairy one, with a ratty set of hair extensions that were presumably meant to reflect Richard's many attempts to be seen as a Christ-like figure. Who knew you could aim for Jesus and land on Alanis Morisette? 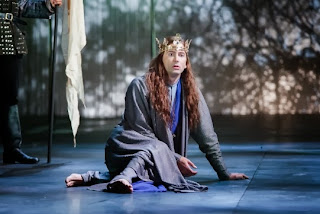 If you're seeing the show it's probably best to acquaint yourself with the photos in advance to get the giggles out of the way. Although even after he'd been on stage a few times, there were occasions when Tennant wandered onto stage and I wondered "who's that grumpy teenage girl?" Once you do get over the luscious locks, Tennant's is quite a different take on Richard than I'd seen before. I'd heard him described as particularly unlikeable, and I can see why, because in many ways he's the most grounded Richard II I've seen. Crowned in childhood, he often has an otherworldly quality (Michael Grandage's production had Eddie Redmayne sit still for half an hour as the audience entered, recreating the famous portrait of the king) but Tennant's Dick seems to be much more aware of his surroundings. He understands his position of privilege more, which adds an edge of spite to his pushing his subjects around. 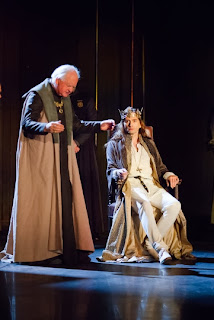 It also means that his development isn't so much that of a man in a sheltered world having it taken away from him and learning how to be human, but of one who knows he's pushing things as far as they can go, and cataclysmically collapses when he realises he's gone that step too far. It's an interesting take on the central role, in a production that doesn't have that many surprises outside of it. 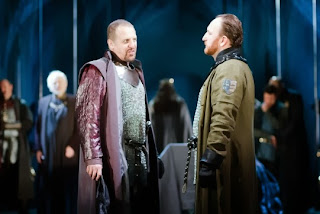 Nobody thought Greg Doran was the most adventurous choice to lead the RSC, and his inaugural production backs this up - a solid take on Richard II but never a stellar one. As well as the opener to the new AD producing the complete works of Shakespeare on the RST stage over 6 years, it's the opener to a specific intention to do the History cycle, and the production ends with a reminder that its events will haunt English kings for some generations to come. So it's a shame that the already-announced Henry IV plays won't see Nigel Lindsay return, as I would have like to see his brutal, pragmatic Bolingbroke face the consequences of his coup as King Henry. 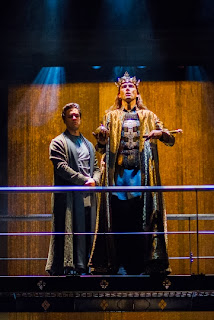 Character work is really the production's strength, Oliver Ford Davies' rather fed up Duke of York a scene stealer, as is Marty Cruickshank in the somewhat twisted comedy of her scenes as his wife. Oliver Rix gives their son Aumerle a through-line that's often lacking from the character, displaying from the start the confused loyalties of someone whose two cousins are fighting for the throne. Michael Pennington dominates early scenes as John of Gaunt, and Emma Hamilton gives some life to a Queen who's rarely seen with her King but has to spend her time in the play dealing with where his actons leave her. 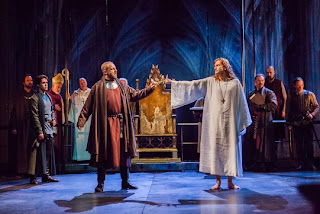 Stephen Brimson Lewis' designs use projections and perspective to create a depth that should transfer well to the very different stage of the Barbican, an he also comes up with an impressive setting for Richard's jail cell. Meanwhile Paul Englishby's choral music provides an eerie soundscape. This is a textbook Richard II, one put together with meticulous care and never a failure, but never quite special either. At least the RSC's budget stretches to a knife, so Richard doesn't have to be murdered with ten thousand spoons.

Richard II by William Shakespeare is booking until the 16th of November at the Royal Shakespeare Theatre, Stratford-upon-Avon (returns only) and from the 9th of December to the 25th of January at the Barbican Theatre. Screening live to cinemas on the 13th of November.