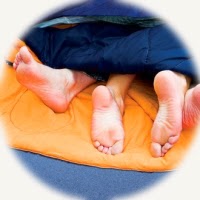 An office-based comedy can be a good vehicle for shining a light on the kinds of jobs everyone knows someone must have to do, but don't usually think too much about. When thinking of disaster relief charities, we're likely to imagine the people going to the scenes of earthquakes and tsunamis to help survivors. But someone has to make sure the money's going to the right place and keep the charity visible enough that more of it keeps coming in, and these are the people Ali Taylor puts at the centre of Fault Lines. Employing just four people plus an unpaid intern, a lesser-known disaster charity is struggling to stay afloat. An earthquake in Pakistan on Christmas Eve gives manager Pat (Nichola McAuliffe) the idea of being the first people on the scene. But the staff are hungover and bickering, and prone to making big mistakes.

Taylor's play opens the morning after the office Christmas party, where four years of sexual tension between Nick (Samuel James) and Abi (Natalie Dew) came to a drunken head. In the process Abi's engagement may have been jeopardised, and when her anger at Nick turns into a competition about how best to achieve the required fast response she makes a very dodgy call about where to send the relief money; a desperate attempt to fix it or cover it up ensues.

Tonight's performance was initially afflicted by some of the kind of audience member that insists on over-laughing from the first 10 seconds but fortunately Lisa Spirling's production is entertaining enough that it was just genuine laughs once it had got going. The picture built up is of a small office like any other with its little loyalties and resentments, but with a funny additional layer of competitive do-gooding that sees the people working there try to one-up each other on how philanthropic they are. Coupled with the fact that the company's survival depends on visibility, so after getting tents to Kashmir the next most important thing is making sure those tents are clearly branded, the offices of a charity don't come out of the story looking much different than any other.

James' Nick and Dew's Abi spark well off each other, with good chemistry as two characters both of whom knowingly exaggerate their personas, he the mockney wide-boy and she the working-class Bradford girl despite both having comfortably middle-class backgrounds. McAuliffe's Pat has a genuine desire to do good but a chaotic manner that makes her a nightmare to work with, while Alex Lawther as teenage intern Ryan has some of the play's funniest moments, as well as keeping you guessing as to whether he's genuinely lacking in any social skills, or a quietly Machiavellian genius shit-stirring his way into a paid job.

A late attempt by Taylor to turn the office microcosm into a metaphor for relations between East and West and the politics behind humanitarian aid is rather laboured and falls flat, which suggests Fault Lines may be best approached as a broad sitcom with a bit of a dark twist, rather than as a comedy with a message, but on these terms the cast spark off each other well to make for a fun evening's entertainment.

Fault Lines by Ali Taylor is booking until the 4th of January at Hampstead Theatre Downstairs.