Theatre review: The Shape of Things 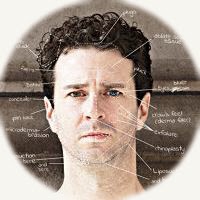 Neil LaBute has written a loose trilogy of plays about body image, which began with The Shape of Things. Set among graduate students at a small-town American university, Adam (Sean McConaghy) is overweight, unkempt and socially awkward, badly in debt and working two jobs to pay it off. One of them is at an art gallery, which is where he meets Evelyn (Anna Bamberger,) an art student intent on spray-painting a cock onto one of the sculptures. They make an unlikely couple but Evelyn gives him her number anyway and soon they're dating. She may look out of his league but he catches up fast - her influence sees Adam start going to the gym and eating better, lose a huge amount of weight as a consequence, change his style and even get a nose-job. And as his looks change, so does his behaviour.

LaBute is often accused of misogyny, although it's hard to pick out a hatred of women from his overall apparent hatred of all humanity. Evelyn is pretty devoid of redeeming qualities but the men are hardly that likeable either. Adam's good-looking best friend Philip (Séan Browne) is abrasive, arrogant and rather useless, but as Adam's looks improve he too becomes increasingly deceitful, kissing, and probably doing a lot more with, Philip's fiancée Jenny (Harrie Hayes,) and frequently lying about what he's been doing. 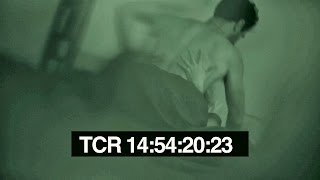 The play requires quite a major transformation from its male lead, which McConaghy effects pretty well physically, as well as convincing as his character acquires sharper edges. The nastiness often comes across well in Samuel Miller's production but the humour not so much, this is a cruel but very sharp comedy, and it often felt like lines should have come across a lot funnier than they did. It's early in the run so the comic timing and pace may come - I hope so because LaBute's impact is diminished without it. What's actually memorable is takis' design, which sees the bulky piece of sculpture that dominates the first scene, pulled apart to create the sets for the ensuing locations.

The play's final twist isn't the hardest thing to guess, so I do feel like the production could have made it less obvious. Bamberger's Evelyn is a bit too obviously glamorous and hints too heavily from the off that the relationship with Adam has an ulterior motive. But a real mistake is a prop given to the audience along with their tickets: A nice bit of scene-setting, perhaps, but a whacking great clue to the story we were really about to watch.

The Shape of Things by Neil LaBute is booking until the 21st of December at Arcola Studio 2.