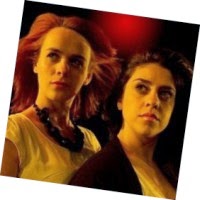 Having the set collapse on them six nights a week apparently doesn't leave the members of Mischief Theatre as bruised as they would like. So past and present cast members of The Play That Goes Wrong are spending the occasional Monday night off back at the Duchess Theatre, reviving their improv show Lights! Camera! Improvise! As the title suggests, there's a movie theme, and after Oscar (Jonathan Sayer) gets suggestions of genre, location and title from the audience, the rest of the company (Charlie Russell, Bryony Corrigan, Henry Shields, Nancy Wallinger, Henry Lewis, Dave Hearn and Josh Elliott) have to bring it to life. Tonight we got a romantic comedy called "Plenty More Fish," in which shy Gerald-the-man (Shields) has to declare his love for Susie (Wallinger) before she leaves her job at the aquarium at the end of the week. But he has competition from her ex, Tony (Hearn,) an alpha-male fishmonger whose seduction technique is inspired by an angry seagull.

This being an improvised show, I can't write a review that could tell you anything about what you'll see if you decide to see a future performance. I can say though that the company clearly benefit from the amount of time they've been working together, and as this now only a once-a-month event, they seemed very fresh, and enjoying the chance to do something different. Russell is very quick with a bad pun, Corrigan has a good knowledge of Disney films but Lewis does not, which turned out to be a problem for him. Having seen Hearn play the gormless Max in a couple of ...Goes Wrong shows, it's fun to see him turn his physical comedy skills to a baddie. Elliott returns to play a magician and a mobster cat - if I remember correctly from the Q&A a couple of years ago, he's a medical student by day, so some day you could well find yourself treated by a doctor you've seen lick Dave Hearn's head because they were being cats.

Shields has the square-jawed American hero look down pat (the whole cast maintain their American accents throughout very well) which may have made the climactic moment of Gerald-the-man punching his ex (Russell) in the face even funnier. Sayer meanwhile conducts the fun from the side of the stage, stopping the action to demand the cast fix plot holes, or give them impossible things to do - tonight Lewis as Gerald-the-fish and Russell as Susie-the-fish had to improvise a song simultaneously. If it's always of this quality Lights! Camera! Improvise! should be worth a look whenever it makes a return.

Lights! Camera! Improvise! by Mischief Theatre is booking in repertory until the 7th of February at the Duchess Theatre.