Re-review: The Book of Mormon 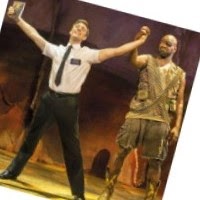 Nearly two years after opening in London, The Book of Mormon remains one of the West End's hottest tickets. This was my first return trip to the show since I first saw it - you can read my original review here - and this time it was my Christmas present to my sister. American actors A.J. Holmes and Billy Harrigan Tighe have taken over the lead roles of Elders Cunningham and Price, and Kevin Harvey has replaced Giles Terera as the Elders' guide to the Ugandan village, Mafala Hatimbi, but otherwise the main cast have all stuck around - although tonight Lucy St Louis was understudying Alexia Khadime as Nabulungi and doing a good job of it, with a powerful voice in the funny but touching "Sal Tlay Ka Siti." Although the show was never overlong in the first place, it now seems to have shed an extra 15 minutes from when I last saw it, making it zip past all the more speedily and satisfyingly.

Harrigan Tighe is perfectly good if a bit bland, even by the standards of this role, and he only really gets his moment in his uncomfortable encounter with Chris Jarman's General Butt Fucking Naked. Book of Mormon is Cunningham's show really though, and that's even more obvious in this pairing, with Holmes the absolute star of the evening: He's not the physical type who's usually cast in the role (Cunningham's meant to be short and overweight, and there's been a lyric change to reflect the fact that Holmes isn't) but he justifies his casting immediately with a portrayal that seems very much his own. Not so much geeky as borderline autistic, overly enthusiastic to the point of being uncontrollable, he's very funny and instantly someone you root for, winningly ridiculous in songs like "Man Up" and "Baptize Me." 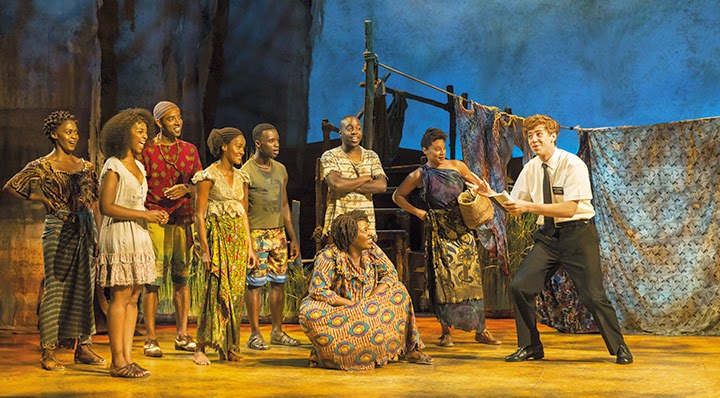 Elsewhere Stephen Ashfield continues in his Olivier-winning role as the closeted Elder McKinley, stealing the show not only in his big number "Turn It Off" but also in his briefer appearances in setpieces like "Spooky Mormon Hell Dream." Again, this remains a big enough hit that you don't need me to tell you to go see it, but it's worth remembering that the Prince of Wales has very good sightlines from the Circle, which leave you feeling surprisingly close to the stage even from the back of the theatre. So although tickets aren't the cheapest around, if you do book well in advance and go for the less stratospheric prices, you won't end up feeling left out of the action.

The Book of Mormon by Trey Parker, Robert Lopez and Matt Stone is booking until the 2nd of May at the Prince of Wales Theatre.