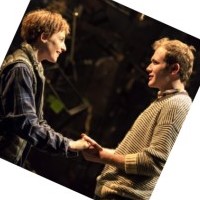 With Rufus Norris, by his own admission, nowhere near as strong on the classics as his predecessor and relying heavily on advice from his associates, the choice of As You Like It as the first Shakespeare play of his tenure was greeted as something of a predictably safe choice. Happily this isn't something that extends to Polly Findlay's production which, though far from the funniest version of the play I've ever seen, may be one of the most charming and visually inventive. The setting is the court of a usurping duke - here a modern-day stock trading office - whose daughter Celia (Patsy Ferran) has been allowed to keep her cousin Rosalind (Rosalie Craig) as a companion. But Duke Frederick's (Leo Wringer) moods are unpredictable, and he decides to banish Rosalind. She and Celia escape to the forest, taking with them the clown Touchstone (Mark Benton.)

Also fleeing the court is the nobleman Orlando (Joe Bannister,) whom Rosalind just so happens to have fallen in love with. When she meets him again in the forest, she discovers that the feeling is mutual, but by this point Rosalind is disguised as a boy, and instead of revealing herself she comes up with a plan to test Orlando's love. 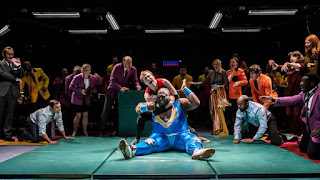 The very specific stock-trading setting of the opening scenes isn't one I bought as a metaphor for the Duke's court, but the famously aggressively macho environment does suggest a logic to the wrestling match that first brings the lovers together, that wouldn't really work in any other kind of office setting. It's also a very controlled environment that Lizzie Clachan's design can transform into a chaotic, expressionistic forest of suspended chairs and desks - a set change so spectacular it got a round of applause (undermined somewhat tonight when the show then had to be stopped for 5 minutes as various parts of the set had got tangled, and a couple of cast members suspended from the flies had to be let down for their own safety. That's the trouble with spectacular effects, they can go spectacularly wrong.) 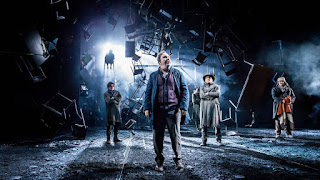 Fortunately this didn't affect the production's enthusiasm for too long and the move to the forest brings with it many of the most memorable characters in the play, notably the one with its most famous speech: Paul Chahidi is an unsurprisingly great choice to play the exiled Duke's courtier Jaques, much noted for his melancholy but paradoxically giddy at meeting Touchstone. Findlay has generally chosen a cast of familiar stage faces but not necessarily "star" casting, and it pays off: Ken Nwosu's Silvius quickly gets audience sympathy, so hapless in his pursuit of Gemma Lawrence's Phebe that he has a literal raincloud hanging over his head; while Ekow Quartey's geeky take on William makes even that thankless role memorable. Alan Williams' Corin becomes something of a patient observer of the madness from the sidelines, who takes over as Hymen for the quadruple wedding. 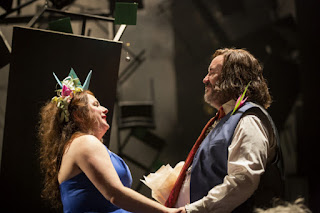 Celia is a role with a habit of stealing the show and it's no surprise that Patsy Ferran does so here, with her expressive face reacting in horror to Rosalind's convoluted plots, and in panic to some of the situations they get them into. I spent much of the show looking forward to her eventual pairing up with Philip Arditti's Oliver, and their awkward romance didn't disappoint. 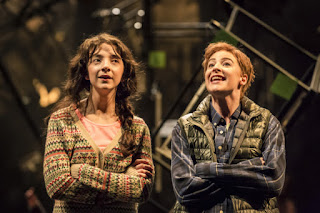 The focus of the play is of course Rosalind, and much of the publicity has centred on Rosalie Craig, best-known for musical theatre, being co-opted at a comparatively late date to take on the lead. She does repay the National's faith in her with a confident and lovable performance, if not the most show-stopping Rosalind ever - what's most notable is what a great couple she and Joe Bannister's jittery Orlando make. They're very well-matched, Craig's Rosalind not coming across as in control as the character sometimes does - instead the extent to which she's making things up as she goes along is foregrounded, making the central pairing an adorably, equally awkward one. 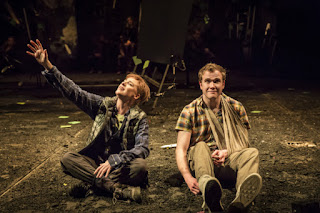 This charm is as much the keynote of the production as the striking visuals - it isn't non-stop laughs from start to finish, but there's a lot of really warmly comic moments. Notably a scene where the majority of the cast play sheep, eating Orlando's bad poetry while Chahidi's sheep stares out an audience member. It seems like the kind of silly moment all the cast wanted in on, as even Craig and Bannister, whose characters appear elsewhere in the same scene, get a moment on all fours. Findlay has even managed to keep a wintery setting for most of the play without sucking the joy out of it like Sam Mendes did when he tried the same thing. Plus, in what is at least my tenth production of As You Like It I spotted for the first time that Shakespeare includes what may well be a bitchy dig at his former star Will Kemp and the Nine Days' Wonder, so technical issues aside I found this a warm and satisfying production.

As You Like It by William Shakespeare is booking in repertory until the 5th of March at the National Theatre's Olivier.