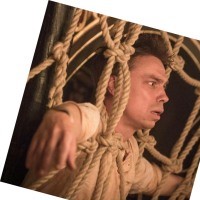 From no Shakespeare at all in its first two winter seasons, Dominic Dromgoole's swansong at the Globe is an all-Shakespeare season in the Swanamaker. I hope this doesn't become the norm, as I liked having the indoor playhouse as a place to showcase other Jacobean playwrights and works that don't often see the light of day. Of course, even a Shakespeare play can be pretty obscure, and as the theme of the season is to play four of the late romances in rep, two of the quartet are rarities. The reason we seldom see the first is that, apart from the entirely lost plays, Pericles is the one of which the least has survived. The version we have is reconstructed from a a dodgy quarto of fragmented scenes, some attributed to Shakespeare, some to George Wilkins. So it's episodic, inconsistent and full of bizarre tangents and plot contrivances. But Dromgoole opts to view the problems as strengths, playing it as a kind of silly alternative to the Odyssey.

When Pericles, prince of Tyre (James Garnon) discovers the nasty truth behind a famous riddle, he fears that a neighbouring king will try to kill him, and takes to the seas in an attempt to lie low. 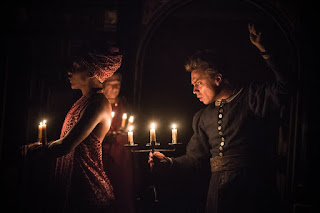 Multiple shipwrecks later he's acquired and lost a wife and a daughter. For more than a decade he tries to rule his kingdom while grieving, unaware that his loved ones aren't anywhere near as dead as he thought. A Globe stalwart and usually the one to kick the performance off into extremes (this recent interview where he compared his acting style to having sex with the audience explained so much,) here it's Garnon's turn to look dazed as Pericles is buffeted by both winds and a series of oddballs he encounters along the way. The rest of the cast get to sink their teeth into creating that crazy world of magic and wickedness he gets caught up in. 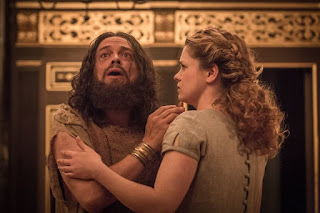 Dromgoole has never, for my money, had the best track record with the Shakespeare plays that weren't that strong to begin with, but a lot of detailed effort has gone into making Pericles work as a surreal comedy. Pericles' wooing of Thaisa (Dorothea Myer-Bennett) at a tournament comes complete with screaming fangirls, and there's great work from Simon Armstrong as her father, secretly thrilled about the prospect of his daughter marrying Pericles but trying to pretend he's stern and disapproving. When she dies in childbirth, Thaisa's revived by Cerimon (Sam Cox,) who decides it's worth trying to bring her back because she's only been dead five hours. And been chucked overboard. Ben loved a play on the words vial/viol that made it look as if he resurrected her by getting the musicians to do some backing music. 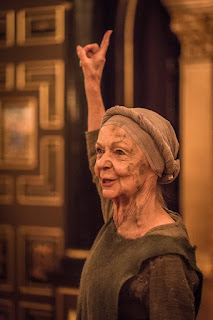 Speaking some of the most overwrought dialogue in the blandest, most conversational way possible gets a laugh every time, and the production is probably best summarised by the plot twist in which Marina (Jessica Baglow) gets abducted by pirates in the middle of an unrelated scene - and that's precisely how it's staged. (She then gets taken off to a brothel dominated by a 1970s-style painting of what looks uncannily like a naked Karren Brady.) The play's narrator, Gower (Sheila Reid) comes across as an extreme version of the Chorus from Henry V, constantly asking the audience to brush aside the huge gaps between scenes with their imagination, but the small space is still mined for all the opportunities for spectacle and atmosphere it can be. 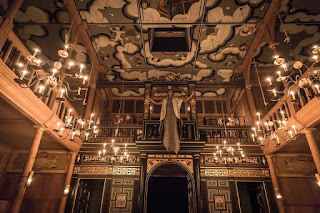 I've only seen Pericles twice before (and one of those was in Greek,) and as my first was over 20 years ago, all I remember of Phyllida Lloyd's production at the National was an impression that the Olivier's bells and whistles were being employed to distract from the play's deficiencies. This one, by contrast, embraces the madness and adds some of its own.

Pericles by William Shakespeare and George Wilkins is booking in repertory until the 21st of April at the Sam Wanamaker Playhouse.