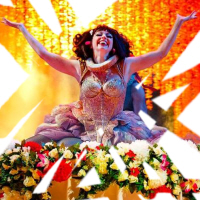 I think I've done a good job of keeping an open mind about Emma Rice taking over the Globe; the former Kneehigh boss has been responsible for various shows I've really not liked in the past, and hasn't helped with comments in the papers about shaking up the text, and the rarely-performed Shakespeares staying rarely-performed under her watch. But people can surprise you* and there's been good buzz around her debut production - indeed the sole Shakespeare play she'll be directing herself in her first year - so I was cautiously optimistic about her take on the currently-ubiquitous A Midsummer Night's Dream. The setting is, sort-of, the Globe itself, where the rude mechanicals become a group of the venue's volunteer stewards, led by Rita Quince (Lucy Thackeray,) who opens the show with a funny but stern lecture on how to behave, before deciding to turn actors themselves with a show to celebrate the royal wedding.

Meanwhile Hermia (Anjana Vasan) is escaping into the forest to elope with Lysander (Edmund Derrington,) and stop her father forcibly marrying her off to Demetrius (Ncuti Gatwa.) But Demetrius' ex-lover Helenus (Ankur Bahl) gives away their secret and soon all four are running around pursuing each other. 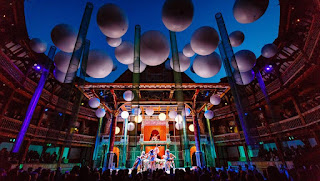 Their story, as well as that of the rude mechanicals, is complicated by the interference of the fairies who live in the woods; in costumes designed by Moritz Junge, the supernatural creatures are grotesques, led by a piratical Oberon (Zubin Varla) drunk on Strongbow, and a Titania with her tights around her ankles, played by controversial recreational drug Meow Meow. Stu Barker's music, meanwhile, has an Indian influence while Börkur Jónsson's set design centres on huge balloons and green cloth pillars suspended above the open to of the theatre. So there's very much an eclectic influence at play here, and I'm pleased to say most of it works. 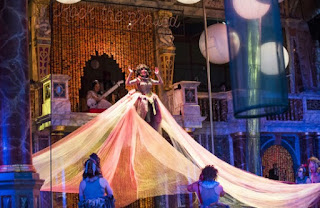 The text has been fairly mischievously played with, but Rice and dramaturg Tanika Gupta's changes aren't of the Julian Fellowes school of "this is too hard for you idiots to understand, let's simplify it," but mainly involve moving text around, turning it into songs, and replacing some of the references for comic effect (although, considering how much of a running joke it becomes that Lysander and Demetrius are Hoxton hipsters, you'd think Junge would actually have styled them accordingly.) Sure, there's plenty of instances of these changes but I've never had any objection to any of that if done for the right reasons, and in any case during Dominic Dromgoole's time there was sometimes a tendency to go too far the other way, trusting the text to do all the heavy lifting and ending up with some pretty plodding productions of the weaker plays.

There's also been some "controversy" over the use of modern technology; as I saw a matinee the coloured electric lights didn't make any impact, but the actors are also miked up - presumably to compensate for how much music features in the show, as I've rarely had audibility issues with actors' voices in the Globe. It's not something I particularly object to on grounds of historical accuracy (they didn't have microphones in 1597 but they didn't have a bloody helicopter hovering over the theatre either) but they've never been my favourite thing on large thrust stages where the actors are spread out over a large area - there's no hint of where you should be looking when all the voices are coming out of the same speaker. I also wasn't a fan of the decorative columns hung over the groundlings: The slightest breeze and they're swaying all over the place, getting in the way of the sightlines - I never thought I'd have to move my head as much to see from a front row Middle Gallery seat at the Globe, as I usually do from the back of the Garrick Stalls. 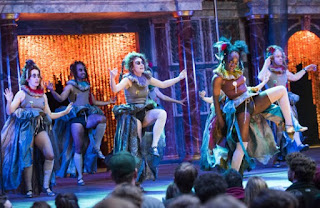 My other issue is with the gender-flip of Helena to Helenus: Even as originally written, Demetrius ends the show still under a love-spell, going off to spend the rest of his life with someone he's been influenced into loving. So nice though it is to have a gay twist to the play there was always a risk it would seem he'd been "turned" gay by magic, and I don't think they've avoided this. Rice and Bahl have argued that Demetrius always really wanted Helenus but thought he should go after a woman instead, but unfortunately there's no hint of this in the production itself - if anything, Gatwa's Demetrius seems upset and turned off by Helenus' rather aggressive advances. 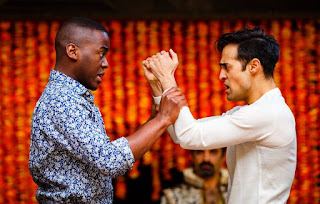 The mixup with the love potion, often the best comic setpiece of the play, is well-done though, and I liked the fact that Bahl has Helenus actually enjoy the attention from both men even as he knows something's wrong. The other couple are very strong, Vasan one of the most lovable Hermias I've seen for a very long time, but it's a shame that, as far as my Googling can tell, Ned Derrington has been completely left out of the production photos released for publicity (I find that the lovers often get short-changed in favour of the fairies, but it's a shame to cut one of the leads completely out of the promo. Especially given the amount of time Derrington spends in just his boxers and a leather jacket; far be it for me to tell the publicity team how to do their job, but I would imagine a photo of that would put a couple of extra bums on rented cushions.) 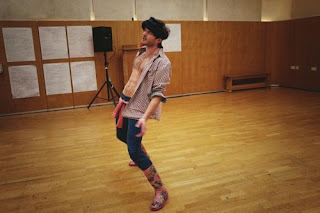 This rehearsal photo was the closest thing I could find

The other big comic setpiece is of course the Pyramus and Thisbe finale, and there's an unusually sexy Bottom in Ewan Wardrop, a former Matthew Bourne dancer who, with the rest of the mechanicals all being female, gets to preen and flirt with them, his comic ridiculousness here borne out of wanting to impress. Margaret Ann Bain's Flute is a tomboy who wants to play-fight with him, hence her disappointment at being cast as an actual woman, while Nandi Bhebhe's Starveling gets to fight back at the royal court's sniffy response to her portrayal of the Moon. 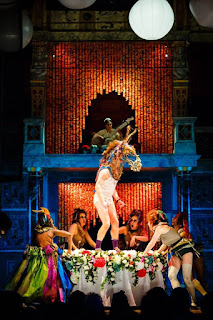 A first production by a new Artistic Director will always feel like a statement of intent, and Rice has clearly ruffled some feathers. There's touches of the director's past problem of ideas that don't necessarily match the material, and it's a bit too eager to please sometimes - Hermia and Helenus breaking into "Single Ladies" made me cringe - but for the most part it does please. Taken on its own it works for the most part while in the long term, if viewed less as the imposition of a new house style and more like a suggestion of experiments to come, it's promising.

A Midsummer Night's Dream by William Shakespeare is booking in repertory until the 11th of September at Shakespeare's Globe.