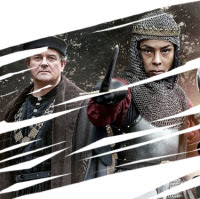 After  the BBC's 2012 series The Hollow Crown presented the second (in order of writing) tetralogy of Shakespeare's Histories, there was a general assumption that it would be followed up with the rest of the story as told in the Henry VI plays and Richard III. But response to that quartet was mixed, and the Henry VIs, written earlier in Shakespeare's career, aren't particularly well-loved, and I got the distinct impression the BBC weren't too keen on going there. The occasion of the 4th centenary of the playwright's death and the resulting on-screen festival got them to reconsider - although I can't help suspecting it was the fact that the ever-popular Botulism Nanobot agreed to play Richard III, probably guaranteeing big ratings, that finally got this green-lit. Ben Power has stayed on from the first series as adaptor, but Dominic Cooke has been given directing duties on all three films - a good idea, as the first series wasn't always that cohesive from one part to the next.

And yes, I said all three films because the fact that Part 1 in particular is considered very weak means they've followed the lead of John Barton's Wars of the Roses and edited the first three plays in the quartet down to two; I would have personally also gone with Barton's re-titling of them as Henry VI and Edward IV, but instead this first film gets the mouthful of The Hollow Crown: The Wars of the Roses - Henry VI Part 1. 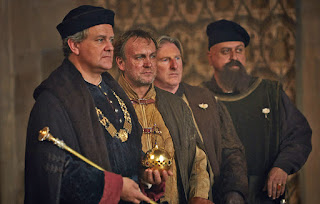 Power and Cooke's editing of the text makes for something of a political soap opera but the main storyline that emerges is that of the rise and fall of the Duke of Gloucester, made Lord Protector and therefore ruling on behalf of his nephew Henry VI (Tom Sturridge,) but finding himself the target of conspiracy as Henry becomes old enough not to need a surrogate - but is obviously inept enough to be easily influenced. Hugh Bonneville is excellent as the anchor of the film, and with him having returned to theatre recently after a long absence, I can't help hoping that he chooses some onstage Shakespeare next (and somewhere where I can see it.) The downfall of his wife Eleanor (Sally Hawkins) becomes a major part of this story arc, and while the fact that she's attempting witchcraft is shown, the suggestion that she's successful isn't so much. 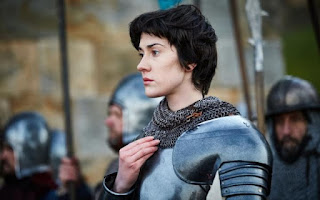 Also coming off better here than in Shakespeare's version is Joan of Arc (Laura Frances-Morgan,) a lustful witch in Shakespeare's play but allowed to be the virginal victim here. Her burning at the stake is one of the more powerful scenes in the film, while it also sets up Ben Miles's Somerset as the baddie of the piece: Stuffing his face while he watches the execution is Villain Edit 101 - if popcorn had been an option he'd definitely have been tucking in. 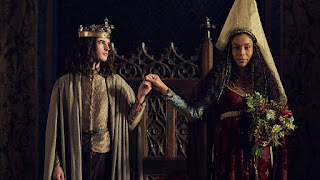 The fact that she becomes Somerset's lover doesn't necessarily endear us to Queen Margaret, but as the one character who will recur throughout the cycle, Sophie Okonedo makes her a force to be reckoned with. Pleasingly, I saw far fewer snide comments on Twitter about "historical accuracy" over casting a black Queen of England than I expected*. But then how could you complain when Okonedo is such perfect casting, making her shrewd but not unlikeable - a woman who's been married off to an idiot, sees everyone vying for power over him, then swoops in to take it herself. Obviously while I have no problem with hefty edits I'm never a fan of actually rewriting huge chunks of Shakespeare's dialogue, but who could honestly complain if Power and Cooke chucked one of these in?

And actually Shakespeare's dialogue comes across particularly well here - it's spoken naturally and clearly. With all the predictable publicity that has compared this to Game of Thrones, I could actually imagine people stumbling on this while flicking channels and taking a while to register that it wasn't just a particularly floridly-written historical drama. Of course there's a cast who are bound to deliver - I particularly liked Samuel West's hissy Bishop, while Stanley Townsend's beard was a character in its own right. With the late Tom Beard making a few appearances as Sir William Lucy, it was nice to see at the end that the film had been dedicated to his memory - and a rather good, dynamic film it is to be remembered by.

*in fact giving Joan of Arc a Northern accent came in for a lot more confusion online
Posted by nick730 at 23:05