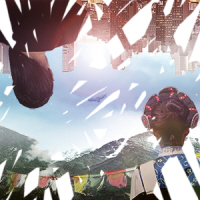 Amy Ng's debut play is named Shangri-La after an imaginary place - or at least one that used to be imaginary, until an area of Tibet was renamed after the Capra film Lost Horizon's setting, in a canny grab for tourist dollars. In a play that jumps between two periods in the life of Bunny (Julia Sandiford,) the real Shangri-La is where she lives in 2001, the 14-year-old daughter of a shaman who runs a failing guest house. An encounter with an Irish photographer gives Bunny the seeds of a love of photography that'll endure into adulthood; but it also leads to an event that'll make her loath to return to the Himalayas when we meet her as an adult in 2014, working as a guide for an ethical travel company in Beijing.

But her boss Nelson (Kevin Shen) convinces her to return and take the wife of an American billionaire on a tour of the mountains - Sylvia (Rosie Thomson) runs a charitable foundation that might invest heavily in Nelson's company if she enjoys herself. 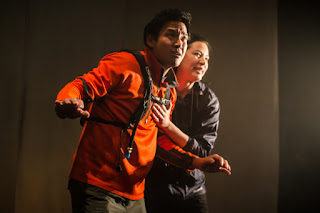 Bunny appears conflicted by having to sell out her culture to impress Sylvia, but she's paired up with another guide with no such qualms - Karma (Andrew Koji) is happy to shamelessly flirt with his client, and give her an "authentic" Tibet made up of dodgy deals she can't see, while dressing the chauffeur up as a Living Buddha to make her think she's had a unique experience. Shangri-La has a head start towards making for an interesting evening as it deals with an area you don't hear much about, at least not on the London stage. So it provides a form of cultural tourism of its own, including a major theme of the story concerning mountain burials by feeding to vultures, of which my only former knowledge was an issue of Sandman (and I did always wonder where the inspiration for that had come from.) 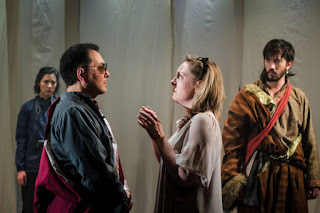 Unsurprisingly, China looms large over everything - a number of characters mention the buildings and religious artefacts and traditions that were suppressed or destroyed by the Cultural Revolution, while there's also a culture of suspicion: Bunny and Karma each insist that the other is in the pocket of the Chinese, and that they're the one with the real concern for upholding traditions. In fact the play suggests that, ironically, selling out a culture might be all that can save it - Bunny belongs to the Nakhi people, a little-known and endangered minority, while the Tibetans who've captured the imagination of the West are thriving in comparison. 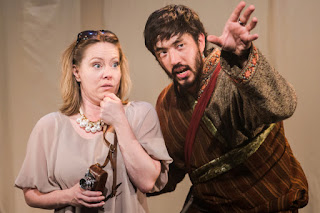 But although none of the characters come out of Ng's play looking great, Charlotte Westenra's production notably latches onto the humour in the characters: There's a lot of fun to be had from the easily-convinced Sylvia and the shameless Karma, who keeps lotus flowers in his pockets to spread around if the landscape isn't looking as picturesque as he'd like. I don't know if the many hanging cloths used in Yatkwan Wong's design got in the way of the Finborough's usually-excellent air-conditioning, because it was uncomfortably hot, which made me impatient with the play's latter scenes in which the characters reveal how far they're willing to exploit their heritage (and must have made things very difficult for the actors wrapped up against the Himalayan cold.) But overall Shangri-La makes the most of its interesting subject matter and creates some memorable, if not always likeable characters.

Shangri-La by Amy Ng is booking until the 6th of August at the Finborough Theatre.