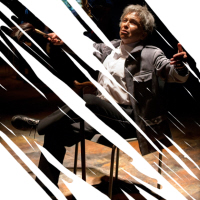 There's people with a mixed reputation, and then there's Haile Selassie, who ruled Ethiopia for half of the Twentieth Century. Depending on who you ask he was everything from a narcissistic dictator who watched his people starve to death while he lived in luxury, to the literal Second Coming, with the religion built around him - Rastafarianism - still thriving to this day (plus he seems perfectly nice on Bake Off.) If there was any doubt that the subject's a controversial one you could add the lone protestor outside the Young Vic tonight, with placards calling Ryszard Kapuściński's book The Emperor "literary colonialism." The book is adapted for the stage by Colin Teevan and directed by Walter Meierjohann, reuniting Kathryn Hunter with the team behind her tour-de-force Kafka's Monkey.

And true to form, The Emperor gives us a conflicting view of who Selassie ultimately was, through the voices of those who worked closest to him. 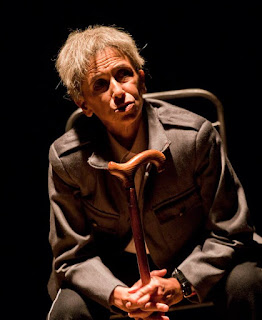 Journalist Kapuściński interviewed the surviving palace staff after the emperor's death, and Hunter plays them all, from a dignified old valet to a flamboyant steward whose job was to bow to Selassie on the hour like a human clock. It's another impressive performance from the most flexible - literally and metaphorically - actor out there, and as she recounts the story of a servant whose job was to put cushions under the emperor's feet when he sat down, so his legs wouldn't dangle and remind everyone he was short, a sometimes brutal story of power is turned into absurdism. 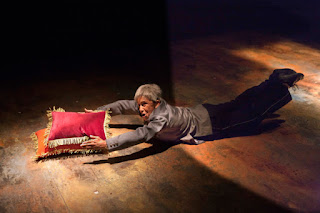 It starts off very funny, Hunter quickly endearing herself and her characters to the audience as usual, and the light touch remains even as the story gets darker - the camp steward is an audience favourite who gets a great little payoff at the end. The only other person on stage is musician Temesgen Zeleke, who also serves as the son of the character we see the most of: A minister still aggressively loyal to his late master, even when his son's rebellion - students were among the first to question Selassie's rule - led to his death. There's a smart moment when Hunter takes the musician's microphone away to use it herself, as the minister tries to silence dissenting voices, and eventually Zeleke leaves the stage to let Hunter's characters unravel in silence. 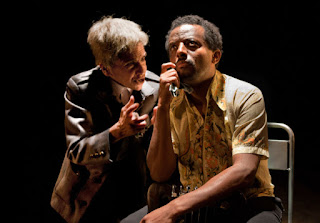 So in many ways this is the usual story of power corrupting - Selassie's successor was a bloodthirsty military dictator so it's not like anything improved - but told through an interesting prism of people within touching distance of absolute power without ever getting any themselves, and for the most part still believing in their master's goodness and divinity after his death. It's also, of course, another opportunity to see Hunter put her extraordinary skills to work, doing the work of a dozen actors and making it look effortless.

The Emperor by Ryszard Kapuściński, adapted by Colin Teevan, is booking until the 24th of September at the Young Vic's Maria; then continuing on tour to Manchester and Luxembourg.