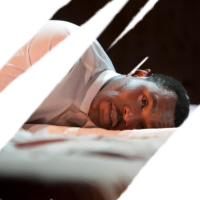 This year's JMK award winner Roy Alexander Weise gets a more recently-staged play to direct than we usually see in this competition - or maybe seven years is in keeping with other productions, and the 2009 premiere of Katori Hall's Olivier-winning play has just stuck particularly well in my memory. The Mountaintop takes its title from the speech Dr Martin Luther King made in Memphis the day before his assassination, and takes place on that last night in his motel room. Needing to stay up to work on the next day's sermon, King (Gbolahan Obisesan) orders a coffee and gets more than he bargained for with it. Room service maid Camae (Ronke Adékoluejo) catches his eye straight away and seems to be flirting back, so he asks her to stay a while and share a few cigarettes with him.

King may be a legendary speaker but Camae is a match for him, skewering his pretensions and hypocrisies, and that's before Hall even springs her supernatural twist halfway through the play. 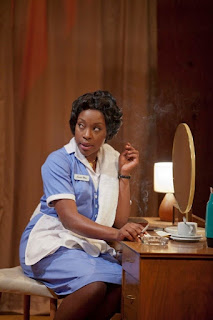 As it has for the last few years, the JMK production lands in the Young Vic's smallest space, giving us an intimate setting for Rajha Shakiry's slightly raised hotel room set, a suitably dingy environment to contrast with the miracles in the story. Obisesan captures the bullishness of King but it's Adékoluejo who's the star as the foul-mouthed angel with pockets as deep as Mary Poppins' carpet bag, munching on popcorn as King spills his soul to her. Weise sensitively handles the play, letting the characters speak for themselves and the surprisingly comic action play out to its inevitable conclusion. 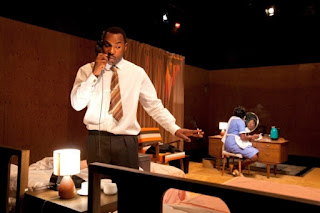 Because Hall's writing is still the showstopper in this play, the iconoclastic treatment of King managing the impressive feat of bringing him firmly down to earth without diminishing his status. Hall throws everything at him from making him into an almost farcical comic figure with smelly feet and holes in his socks, to the fear and arrogance of a man who shouts abuse at God herself when he gets her on the phone, and the highly critical look at his womanising - even when he knows who Camae really is, he can't help making passes at her. 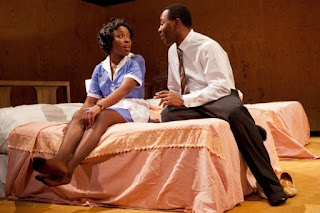 Of course the effect is actually to make King's achievements stand out even more as The Mountaintop's ultimate aim is to bring home the fact that he was simply a very flawed man and yet carried on with his epic task nonetheless. Referencing an even more famous speech of King's, the play ends with him having a dream of the future, and Nina Dunn's video design coupled with Adékoluejo's frantic commentary makes for an incredibly moving finale. I came to this play with high expectations and Weise's production only confirmed how impressive the writing is - now when are we going to see some more of Katori Hall's work staged in London?

The Mountaintop by Katori Hall is booking until the 29th of October at the Young Vic's Clare.