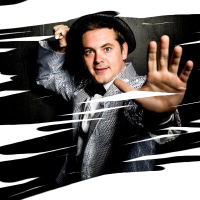 When I did my annual roundup last year there was a first in my list of favourite shows - two new plays by the same writer made it into my top ten. Regular readers (both of them) will know there's only a couple of likely candidates, and while I wouldn't be surprised if Tom Wells manages it too some year, this time it was of course Philip Ridley whose Radiant Vermin I put at number 1, and Tonight with DonnyStixx at number 8; I also gave the latter's star Sean Michael Verey my award for best solo performance. You can read my original review here, from the first-ever public preview, before it officially opened in Edinburgh. It's taken over a year but the murderous but horribly sympathetic amateur magician Donny Stixx is back, David Mercatali's production finally returning to London but to a new venue: The Bunker is an underground former art studio next to the Menier Chocolate Factory that's been converted into a decent-sized thrust stage; I'm pretty sure the multicoloured benches that form the central seating bank are left over from the Menier's production of Assassins.

It's a decent space and although we were front row in the centre block it looks like there'd be good sightlines all round - though I did think that for this show, if you were in the audience left block Verey would have his back to you a disproportionate amount of the time. Because of where the entrance is, the venue has to let the audience straight into the auditorium, which makes a nice change from having to queue up squashed in the bar in most fringe venues, until they deign to open the doors at the last minute. The rather enthusiastic house manager spent the pre-show time dancing around the stage and flapping her scarf around; Phill thought they'd missed a trick in not giving us Strictly scoring paddles so we could mark her dancing. 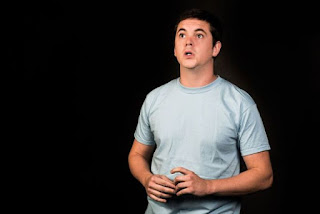 On to Tonight with Donny Stixx itself, and you can refer back to my original review which still stands, although if anything, as you'd expect of a performance that has since had a full Edinburgh run, it's only got tighter and more impressive. As far as Verey's performance goes, for those who saw Radiant Vermin and remember (which you definitely would) the climactic garden party scene, Tonight with Donny Stixx sees the actor keep up almost the same level of energy and multi-character swapping for a full 80 minutes this time, and on his own. It's a great match of script and actor, Ridley and Verey balancing comedy with tragedy while a character whose behaviour ranges from the selfish and deluded to the murderous actually comes off as troubled and sympathetic; Mercatali using his experience of working with both to keep what should be a difficult tone to maintain just right. 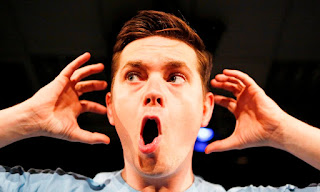 Seeing it a second time meant there was a heartbreaking quality to Donny first mentioning that his mother "doesn't like imperfect things," and as with most of Ridley's work it really does stand up to repeat viewing. Assuming most (both) of my readers are London-based, last year's two preview performances at Soho Upstairs meant that by the time I'd seen the show it was too late to recommend it; now it's back for a month-long run at a decent-sized venue, you really don't want to miss the chance to see a painfully good performance of a story that's deeply moving in a profoundly fucked-up way.

Tonight with Donny Stixx by Philip Ridley is booking until the 3rd of December at The Bunker, 53a Southwark Street.