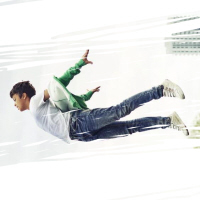 Last year I left Sally Cookson's Jane Eyre at the interval, and Peter Pan isn't a favourite story of mine, so the combination of the two didn't make this year's NT family Christmas show appeal too much. It was only the eccentric casting of Sophie Thompson as Captain Hook that made me book, so the fact that Thompson broke her wrist (the irony!) and had to withdraw from the production was a disappointment to say the least. She's been replaced by Anna Francolini, an excellent choice but, after her villain on the same stage in last year's wonder.land, perhaps not quite as surprising. Wendy (Madeleine Worrall) and her younger brothers John (Marc Antolin) and Michael (John Pfumojena) are left home alone when their parents go to a work party, and flying green child Peter Pan (Paul Hilton) gets into their bedroom. After Wendy helps him get his shadow back, Peter teaches the siblings how to fly, and leads them to Neverland.

Although there's spectacle and technical cleverness here (are we sure the Drum's not working? Looked liked it was working to me) Cookson's aesthetic remains lo-fi. The opening scenes take place in front of a plain backdrop and when that falls Neverland is a graffitied building site with props made out of rubbish - the skip-as-pirate-ship is a highlight; the flying effects are laid bare with the stage covered in rigging and the actors providing counterweights in full view. The casting is deliberately counter-intuitive, with Saikat Ahamet's Tinker Bell an angry man in a tutu, identical twins one of whom is a woman and the other has a beard, and an early scene-stealer in Ekow Quartey as Nana, refusing to act even remotely like a dog and indignant when the family demand he sit. 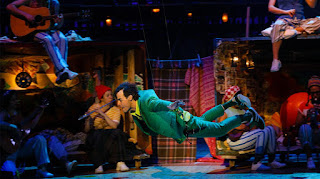 Most of all we have the oldest cast members as Peter and Wendy, the latter coming across as her older self reliving the story as she tells it, the former as an ageing rocker - Edward Tudor-Pan. Unlike the rest of the casting it's not really played as a gag so I did find it a bit distracting - "they're pretty limber for their age" is a strange thought to have about Peter and Wendy. Compared to this the gender-swapping of Hook doesn't register as unusual, in fact Francolini again proves to have great relish for a baddie, but her gold-toothed Hook also offers the chance for vulnerability when we see her waking up bald, tiny and helpless, needing to be dressed back up to her pirate finery by the oleaginous Smee (Felix Hayes, who I've concluded is actually drawn by Dr Seuss.) 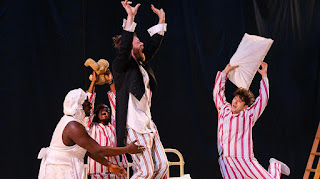 I could have done with more of Lois Chimimba's Scottish Tiger Lily and less of the musical interludes in the second act - pushing three hours is a lot for a family show and at some point you just need to get the story wrapped up. The pointedly theatrical style is most effective when it shows the geography of Neverland as explicitly being made up by the children's imaginations; least so when, because the cast have to clip Francolini into her flying gear, it looks like the children are slowly and deliberately feeding Hook to the crocodile (it's also made clear they murder all the other pirates; this is probably the sort of thing that's actually there in JM Barrie's original but been played down in other productions I've seen.) 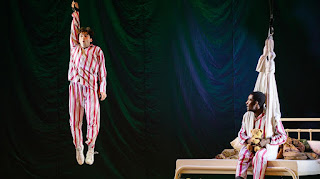 The stated aim of putting Wendy at the heart of the story is also a lot less successful than when Ella Hickson did the same thing for the RSC in 2013: This Wendy might have a lot to say but she's still basically happy to be surrogate mother and moon over Peter, rather than taking a more active role like she did in Wendy and Peter Pan. Like much devised work this is seriously hit-and-miss but a tiny child in the front row (much younger than the recommended minimum of 7) seemed completely entranced throughout.

Peter Pan by JM Barrie and devised by the company is booking in repertory until the 4th of February at the National Theatre's Olivier.