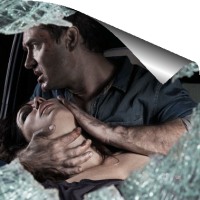 Toneelgroep Amsterdam's season at the Barbican continues with a new play, based on a film by Luchino Visconti - whose work Ivo van Hove frequently stages - and with a cast half made up of Dutch ensemble members, and half of British guest actors (although at times even the latter seem to have picked up the Dutch accent.) After filling it with furniture and audience members for Roman Tragedies, Jan Versweyveld uses the size of the Barbican stage to leave vast empty spaces for Obsession, which takes place in a bar - one that apparently does have some customers, we just don't get to see them. Instead Gino (Jude Law,) a drifter, wanders in playing the harmonica and looking for something to eat, which he may or may not be able to pay for. He's a mechanic and stays to do a few jobs around the place in exchange for his room and board, but the real reason he's sticking around is because he's fallen instantly in lust with the barmaid Hanna (Halina Reijn,) and the second her much older husband Joseph (Gijs Scholten van Aschat) is gone they start an affair.

As the title suggests, they become obsessed with each other to the point of murdering Joseph in a faked car accident, but as soon as a life together seems to be a possibility Gino begins to itch for change again. 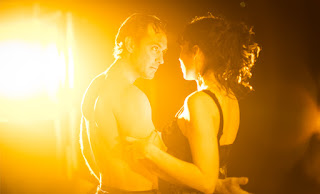 Now that van Hove's profile is international a lot of big names have found out about him and want to work with him - London's getting Bryan Cranston and the just-announced Cate "I can't spell Kate Blanket" Blanchett in the next year - and first up is Law, who's buffed up again for the role (although not quite up to ridiculous Anna Christie levels this time,) making the physical very much the centre of this relationship. And that's needed because this is a relationship looked at quite coldly and clinically. There's not a huge amount of emotional depth to the characters but I don't always need that if there's other ideas on show, and one thing I found clear about the story was that the two had got into their murderous relationship with different ideas: Hanna thought she was finding someone she liked more to replace her unpleasant husband, but Gino will always be drawn to new places, and she was just another new, temporary fixation for him - they've not been together long before his eye roves to a chorus girl, Anita (Aysha Kala.) 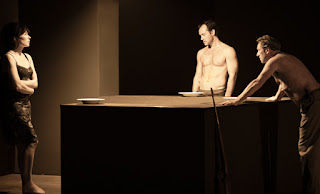 Elsewhere though Obsession is kept a lot vaguer - the expressionistic set gives no suggestion of time or place, and in fact the passing of time is kept very ambiguous as the scenes flow gently into each other, only references in the script telling us how much time has passed. I don't read reviews before seeing a show but it's hard to miss that the critics' star ratings have been cooler for this than for most van Hove shows; they always seem to praise how much clarity he brings to familiar texts and maybe that's why this one turned them off - van Hove deliberately obfuscates the story here, leaving the audience to fill in a lot of gaps such as whether Gino actually had a sexual relationship with Robert de Hoog 's gay drifter Johnny (the gay subplot is apparently why the original film was banned and all but one copy destroyed.) 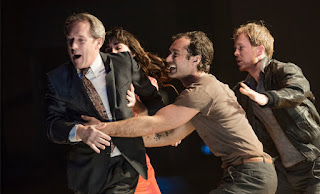 This undoubtedly isn't the director's best work and there's a lot to pick holes in: The dispassionate performance style means that in the sole instance of cast doubling Chukwudi Iwuji doesn't get to differentiate much between his priest and policeman, while a couple of touches take us into into the absurd: Law running on a treadmill to show him trying to escape this life borders on the unintentionally comic, while Reijn lip-syncing for her life while strewing rubbish around the stage tips right over into it; these were also the instances when I felt the show could have been any generic piece of European theatre. 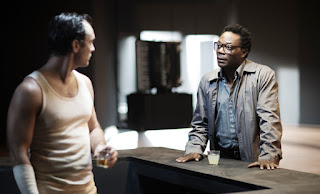 But for all its flaws I didn't dislike Obsession, and certainly preferred it to van Hove's Antigone of a couple of years ago. There's a lot of striking images, including a truck represented by an engine suspended from the flies, spewing oil-as-blood in the death scene in a way that reminded me of the Carmen Disruption bull (this also has a text by Simon Stephens,) with Law and Reijn then going on to wash it off in a scene that nods to Macbeth. Obsession might be frustrating but I never found it dull.

Obsession by Luchino Visconti, adapted by Jan Peter Gerrits in an English version by Simon Stephens, is booking until the 20th of May at the Barbican theatre; then continuing on tour to Vienna, Amsterdam and Luxembourg.