Theatre review: Out of Love 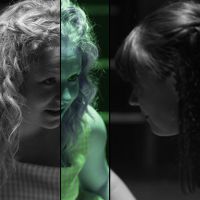 Paines Plough seem to have found a regular London home for their Roundabout shows at the Orange Tree, Richmond 's permanently in-the-round theatre meaning they don't even have to find somewhere to set up their portable stage. As the company often does, they're currently touring three new short plays in rep with the same cast and creative team, and as usual this includes one kids' show I'm skipping, leaving me with a double bill to catch up on. First up is Elinor Cook's equal parts blunt and romantic look at a lifelong female friendship, Out of Love. We first meet Lorna (Sally Messham) and Grace (Katie Elin-Salt) as children, but after that their story jumps backwards and forwards in time to gradually build a picture of a tempestuous relationship that sometimes seems to have turned into hate, but in reality will always come back to the genuine love they feel for each other.

Right from the start, Lorna is the one who attracts the attention of boys, something Grace is jealous of, even as her friend envies her in turn for being more academic. 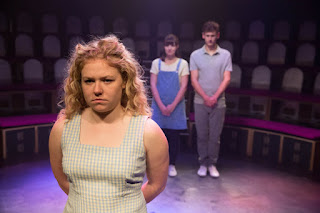 The time-jumping structure means we know early on that Grace's promise won't be fulfilled as she becomes a teenage single mother while Lorna goes on to make a success of herself - of sorts - in publishing. To some extent the women's limitations are set by men (all played by Hasan Dixon,) but the play's gender politics are a subtle part of it, Cook's real interest is in celebrating a female friendship that survives against harsh odds and she certainly manages that. Although we hear a lot about both girls' fathers we hear less about their mothers, something that's explained at the end as Cook has a further dimension to add to the story. 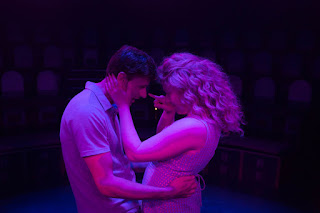 Mulling the play over afterwards, it suddenly struck me - and I guess SPOILER ALERT for the plot - that the story is essentially Beaches, but James Grieve goes for a fast-paced, stripped-down production that gives it its own identity. Dixon has a lot to do with just a few changes of accent to differentiate between eight characters, but quite rightly the show belongs to Messham and Elin-Salt in the end. I enjoyed but wasn't blown away by the play, but the fact that I'm not the target audience could be evidenced by the amount of women in the audience sobbing and hugging each other on the way out.

Out of Love by Elinor Cook is booking in repertory until the 3rd of March at the Orange Tree Theatre.