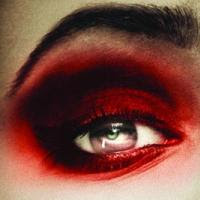 It's apparently double-barrelled name week at the theatre for me: Nathan Stewart-Jarrett on Monday, Harry Hadden-Paton last night and a triple dose tonight with Henry Lloyd-Hughes, Kobna Holdbrook-Smith and director Joe Hill-Gibbins - even the anti-heroine of Middleton and Rowley's The Changeling is called Beatrice-Joanna. Contracted by her father (Howard Ward) to marry Alonzo (Duncan Wisbey,) Beatrice-Joanna (Jessica Raine) has her eye on Alsemero (Holdbrook-Smith) instead. Her solution is to charm detested servant De Flores (Daniel Cerqueira) into murdering Alonzo, but she hasn't counted on De Flores being obsessed with her, and demanding a reward she's not prepared to give willingly. Designer Ultz has created an industrial in-the-round set with seating on both levels of the Young Vic's Maria; I initially went in downstairs, but got the feeling parts of the set would block some of the action so went upstairs. From there, looking down on the action from behind netting, the feeling is of being at some kind of secret fight to the death.

The chaotic set is a reflection of Hill-Gibbins' production, which goes for a sense of surreal hysteria. Somewhat tenuously connected to the main plot is a subplot set in a lunatic asylum, where Lloyd-Hughes' Antonio pretends to be a patient so as to get to the asylum-keeper's wife (Charlotte Lucas.) If not so much the story, it's the tone of insanity about the subplot that ties in to the rest of the production, and James Farncombe's lighting is used to good effect in differentiating the play's various worlds.

Jacobethan tragedy can be so OTT as to be funny, and in marked contrast to the recent Southwark Playhouse production (frankly, far from the only way in which this production has the edge) the director has embraced its extremes. Jelly, punch and trifle feature both in the violence, and in the sex during the bed trick that gives the play its title. Although if the chocolate sauce was meant to signify what I thought it was, someone ought to see a doctor. The production's full of ideas, which is good, even if they don't always work - it takes quite a while for the story to take shape, and one very clever visual device is used a couple of scenes after it could have provided a helpful shorthand to what had happened offstage. It's a well-acted production though, and one whose energy and tongue-in-cheek approach to the subject matter makes it memorable.

The Changeling by Thomas Middleton and William Rowley is booking until the 25th of February at the Young Vic's Maria (returns only according to the website, although tonight I could see about a dozen empty seats.)