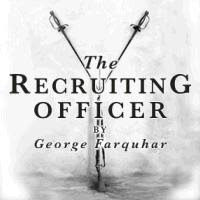 Captain Plume has been courting Silvia for some time, and Mr Worthy has been courting her cousin Melinda. But when both women come into unexpected fortunes, the men find themselves socially inferior to their prospective brides, and so no longer considered worthy of marrying them. Josie Rourke opens her first season at the Donmar Warehouse with George Farquhar's 18th Century comedy set in Shrewsbury, where Plume (Tobias Menzies) is on the hunt for more soldiers for the endless wars in Europe. Together with his recruiting officer Sergeant Kite (Mackenzie Crook) he's more than willing to use underhand tactics to get the local men to sign up.

Seeing The Recruiting Officer so soon after She Stoops To Conquer is a bit of a culture shock at first, as Rourke has opted for a surprisingly low-key approach to Restoration comedy. Lucy Osborne's dark wood set has been lit partly with candle-light by James Farncombe and there's often a melancholy air to the music provided by five of the supporting actors who double as the house band. It could be a risky approach in a genre full of multiple colliding plotlines but in this intimate space it's a successful one, and if it's not a laugh a minute it certainly has its fair share of comic moments. A strong cast makes for plenty of different sources of comedy: Gawn Grainger as Silvia's father Justice Balance gives a fruity-voiced burr to every mention of his pneumatic niece's name, while Rachael Stirling's plummy Melinda is a contrast to Aimeé-Ffion Edwards's dopey local girl Rose (who had one of my favourite visual gags of the show in her response to the old "pull a coin from behind her ear" magic trick.) Nancy Carroll is good as Silvia but the plotline of her disguising herself as a man to join Plume's regiment never quite felt like it worked for me.

Surely Mark Gatiss' career so far has just been leading up to him playing a Restoration fop as he's so well-suited to it - he's Captain Brazen, recruiting (much less successfully) for his own regiment, and mistakenly convinced he has a chance with Melinda. He's a lot of fun whether he's claiming to know the entire family line of everyone he meets, or using the audience in the stalls as a hat rack. In among Kite's various schemes to enlist more men, the main setpiece sees him set up shop as a fortune-teller, informing the locals that fate wants them to join the army. Crook, Menzies and Nicholas Burns as Worthy make this the most frantic, silly section of the play. I was once again accompanied by Jan who actually found this scene surprising, as if it might have been anachronistically added later; I don't know, I can imagine a fairground fortune-teller being the kind of thing a Jane Austen character might get privately excited about.

Rourke uses the band to tag on a final reminder that much of Farquhar's humour has been at the expense of men being turned into cannon-fodder, in practices that were very real at the time (the playwright himself had been a recruiting officer.) In a slightly unexpectedly understated way, a promising start to her tenure as Donmar Artistic Director.

The Recruiting Officer by George Farquhar is booking until the 14th of April at the Donmar Warehouse.