Theatre review: Trelawny of the Wells 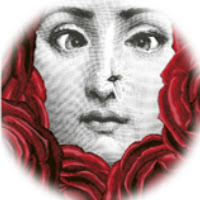 It doesn't seem like Joe Wright is a man to do things by halves. An award-winning film director, he has no previous stage directing credits but has jumped straight in at the deep end, planning two consecutive theatre productions. First up is Arthur Wing Pinero's "love letter to the theatre," Trelawny of the Wells, opening Josie Rourke's second full year at the Donmar Warehouse. The comedy sees Rose Trelawny (Amy Morgan) as part of two different kinds of family: As Trelawny of the Wells she's a popular leading lady in a repertory company, but she's leaving the theatre to marry the well-off Arthur (Joshua Silver.) But before she's allowed to do so she must pass the test of living with his grandfather Sir William (Ron Cook) and great-aunt Trafalgar (Maggie Steed,) and her casual, actressy behaviour doesn't make fans of them.

With Rose's theatre career over and her relationship with Arthur scuppered by his guardians, it's down to her old friends and colleagues (Susannah Fielding and Daniel Kaluuya) to get her life back on track, via the medium - naturally - of theatre. 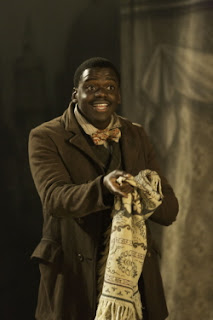 Wright has assembled one hell of a cast for his theatrical debut, but he doesn't always seem sure what to do with them. The central couple are pretty but bland, although that may be largely down to how they're written. Kaluuya is a likeable everyman, Fielding twinkly-eyed and funny, Steed occasionally a scene-stealer. There's also a vain, overacting leading man (Daniel Mays) and his sweet, simple wife (Aimeé-Ffion Edwards, the only person to make me properly laugh out loud all night.) In scenes where two or three characters are on stage, they really get to shine in the way you might expect a cast like this to. But when the majority of the cast are on stage together, Wright can't seem to marshal them together and the show becomes a dreary mess - a cacophony of comic extremes that lacks a real sense of energy. 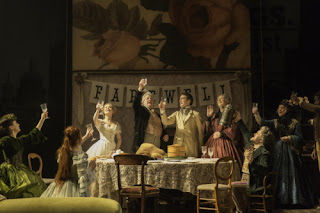 And unfortunately the play's structure sees the opening two acts mostly made up of these big group scenes, making for a really dull first half of the production. It does mean there's a real improvement after the interval when we get the chance to meet some of the characters a bit more intimately, with Cook in particular really coming into his own and enjoying his roles (he also drags up as a theatrical landlady.)

Pinero's play (which here has additional "ornamentation" by Patrick Marber, although I couldn't have told you what any of his additions were) doesn't help itself at times, with the final act's romantic reconciliation marred by an extra "funny" character, a stage manager whose entire comic persona is to shout loudly and inappropriately, and whom Jamie Beamish struggles to make work. With a self-consciously stagey design by Hildegard Bechtler, and a story that alongside the celebration of theatre also laments how it treats the stars who've lost their shine, I can see what Trelawny of the Wells is trying to do. But although most of the cast do redeem themselves individually, as a company they never really click, in a show that has all the trappings of comedy with few of the laughs. Ian and I both wondered if Wright loses his mojo if he doesn't have Keira Knightley around.

Trelawny of the Wells by Arthur Wing Pinero with additional material by Patrick Marber is booking until the 13th of April at the Donmar Warehouse.