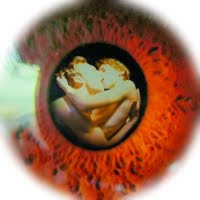 Lucy Bailey's history at the RSC seems mainly to involve directing some of my least favourite Shakespeare plays. And Jo Stone-Fewings', for some reason, always requires him to lounge barefoot on piles of scatter cushions. Both memes are present and correct as Stone-Fewings plays Leontes in Bailey's production of The Winter's Tale. Leontes is the King of Sicilia, and has been friends with Bohemian King Polixenes since childhood. Despite years of happy marriage to Hermione, Leontes is gripped by am irrational jealousy (here strongly implied to be the result of a sudden mental illness) that his wife and best friend are having an affair, and that the baby Hermione is carrying is Polixenes'. The latter is warned in time to escape, but the Queen is subjected to a humiliating show-trial, and when Leontes' doubts are proven groundless he's punished by a series of personal disasters - which only the play's notorious lurch into magical pastoral fairytale can make better.

Bailey has approached The Winter's Tale not as the story of two different countries, but two different classes. The Sicilian court live at the top of a literal ivory tower, a Pre-Raphaelite vision of a world that never existed, shielding them from the industrial society that supports their lifestyle. In the scenes in Bohemia, 16 years later, the bottom of the tower is a rusted industrial chimney, where workers spend their time off in a Lancashire seaside town. 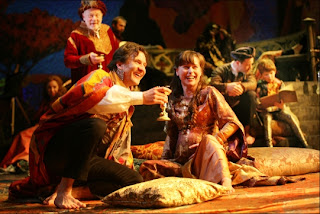 The conceit does beg the question of where Polixenes stands now - if these are their respective domains he's not exactly Leontes' equal, which is kind of important - but otherwise it works pretty well. Leontes' lifestyle is so carefree he ends up looking for problems to solve, and settles on a pretty extreme one to convince himself of. And once he's learnt the error of his ways, we actually get to see the King's penance, as Stone-Fewings remains at the top of the tower, haunting the pastoral scenes below while the working class enjoy their holiday. William Dudley's designs include some stunning imagery in the set, including a great coup de théâtre to create the tower itself. But his video projections, particularly prominent in the first half are a bit less successful (and apparently very distracting if you're facing them directly; from the side of the stage I didn't find it that big a problem.) The play's other famous headache to produce is the brief appearance of a bear, and while the idea of a tsunami as a metaphorical bear is interesting, the actual computer animation is pretty laughable. 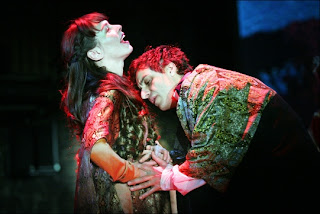 Tara Fitzgerald was for me one of the main attractions of the production, and the key note of her Hermione is the desperate frustration of being falsely accused by a man unable to listen to reason. Stone-Fewings portrays this with an edge of madness and a particular moment of violence that made one audience member scream in horror at this afternoon's performance. Adam Levy's Polixenes may be innocent of the crime he's actually accused of but he reminds us that in his way he's as negligent a father to Florizel as Leontes is to Perdita. And Bailey's production also foregrounds the importance of Paulina (Rakie Ayola's take on the character so fierce even Leontes cowers from her at one point,) pretty explicitly taking the non-magical explanation for Hermione's resurrection at the end. 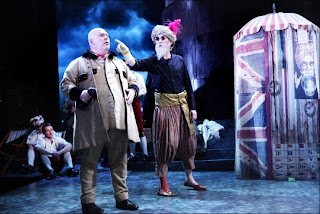 Down in Bohemia, Pearce Quigley dials down Autolycus' malevolence, opting instead for a "lovable rogue" view of the pickpocket. His are the funniest, most successful parts of the pastoral scenes, and he endears himself quickly to the audience with the inventive way he turns the staples of a seaside pier into his first disguise as a beaten-up blind man (despite competing for attention with Joseph Pitcher in a deckchair in a very, very, very short swimming costume directly below where I was sitting.) Quigley spars well with the dim Young Shepherd, a typically no-holds-barred performance from Nick Holder with a touch of the smutty seaside postcard to it.

Of the three times so far Bailey's tackled a Shakespeare I'm a bit dubious about, this was probably the most successful, although it doesn't manage to disguise the issues I have with the play. Notably the first half which, though dramatic, feels pretty static and the relentless buildup of jealousy and accusations bores me after a while. And despite a few cuts, the production does run much longer than advertised just as last year's Shrew did - a too-leisurely pace does seem to be a recurring issue for this director. But although the pastoral scenes aren't quite as full of life as they could be, at least Bailey keeps some of their joy and optimism carrying through to the return to Sicilia. 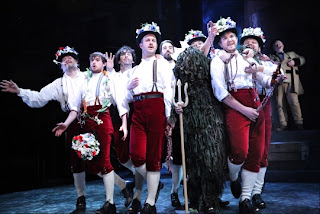 So while this won't go onto the short list of productions that make me reassess long-held feelings about a play, it's a good enough telling of The Winter's Tale, with some clever touches that for the most part illuminate rather than distract. Just learn to inject some pace into your productions please, Lucy Bailey - one Trevor Nunn in the world is quite enough, thanks.

The Winter's Tale by William Shakespeare is booking until the 23rd of February at the Royal Shakespeare Theatre, Stratford-upon-Avon; then touring to Milton Keynes, York, Nottingham, Edinburgh, Hull and Stoke-on-Trent.