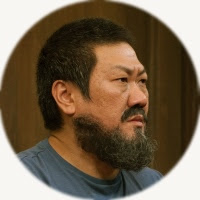 It was only a matter of time before a play came along with a hashtag in the title. At least it's appropriately on-theme in #aiww: The Arrest of Ai Weiwei, as the artist's criticism of the state on blogs and Twitter are at the heart of how he offended the Chinese government. But any admission of this is a long time coming, as Howard Brenton's play is a study in disinformation, trumped-up charges and fabrication as a series of officials try to break his spirit. Ai Weiwei (Benedict Wong,) an artist and architect who designed the Bird's Nest Stadium, was attempting to fly to Hong Kong for an exhibition two years ago when he was arrested at the airport. He would spend 81 days detained and ordered to confess to any number of vaguely-defined crimes, before being released to house arrest on a charge of tax avoidance.

Based on conversations with Weiwei himself in Barnaby Martin’s book Hanging Man, Brenton's play follows his time in small rooms, constantly watched, never physically tortured but allowed to keep believing it was a possibility at any moment. 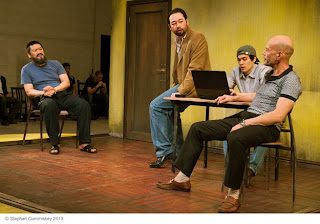 James Macdonald's wonderfully Brechtian production turns Hampstead Theatre into a large white art gallery space (designed by Ashley Martin Davis) in which an audience of art enthusiasts (on loan, I suspect, from one of the drama schools) wait for Weiwei's latest exhibition, which centres around a large crate. This opens up to reveal the first of the rooms Weiwei was held in, to be stared at by guards (when they're not playing Mario World on their phones) and occasionally interrogated by two murder squad detectives (David Lee-Jones, Richard Rees) who don't know that much about what he's meant to have done either. They repeat a script accusing him of everything from fraud to bigamy day after day. Later moved to a military prison, he's constantly filmed, and has to be accompanied even to the toilet. 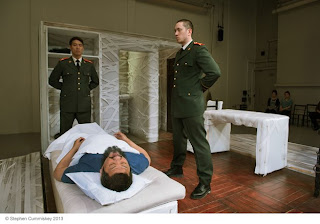 This turns out to be a fascinating couple of hours as Hare explores the power of doing nothing as a tool of oppression. Boredom and enforced routine become instruments of torture but Wong's terrifically restrained central performance sets the tone for a show that finds the absurd comedy in the situation, possibly helping keep Weiwei sane in the process. His story also finds other victims of the regime, like the young soldiers (Christopher Goh, Andrew Koji) escaping poverty by joining the army only to find themselves having to watch a man sleep and go to the toilet, and under just as much surveillance as he is. By having the interrogators mock the artist's work as part of their attack on him, the play also gets to explore the nature and importance of art, Weiwei continuing to defend the value of his work despite his circumstances. 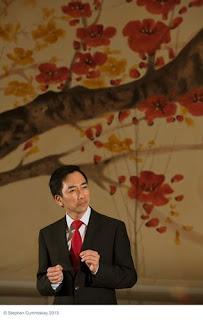 The play does veer away from Weiwei's first-hand experience occasionally to attempt to work out the thinking behind his incarceration, as two high-ranking politicians (David Tse, Junix Inocian) discuss how best to deal with him, and suggest a state whose oppressiveness hides a fear that one person's protest could bring everything crashing down. And this very original and entertaining piece of political theatre holds on to the hope that they might be right, with the young man (Andrew Leung) typing up the interrogations ending up taking quiet inspiration from the artist.

#aiww: The Arrest of Ai Weiwei by Howard Brenton, based on Hanging Man by Barnaby Martin, is booking until the 18th of May at Hampstead Theatre.