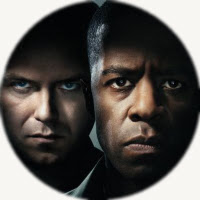 Here's one that's been a long time coming: It feels as if an Adrian Lester / Rory Kinnear Othello has been promised at the National for even longer than the SRB Lear we'll finally be getting next year. Nicholas Hytner's production takes a very literal approach to the play's setting, with a military installation in a hot country that could easily be Cyprus. Othello (Lester) is a career soldier who's risen through the ranks to become General, and is called upon to lead a force in Cyprus when there's a sudden Turkish threat. He brings along his new young wife Desdemona (Olivia Vinall,) who will also become the crux of a plan by his trusted ensign Iago (Kinnear,) who after being passed over for promotion among other perceived slights, has decided to destroy the General's life - or rather let him destroy it himself.

The joy of Othello is in the sheer malevolent genius of Iago's plans, which attempt to take down not only Othello but also Cassio (Jonathan Bailey,) the man promoted to lieutenant above him. The first half of the play sees Iago's plan reveal itself as a complex web of lies and suspicion, plus a couple of lucky breaks for him like the infamous handkerchief1 that comes into his possession just when he needs it. 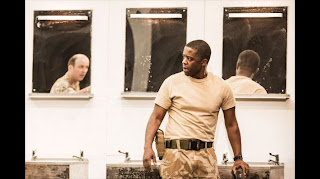 Hytner's staging makes it hard to forget that this is, first and foremost, an army camp. Apart from the opening act when they're on leave, the men are almost always in uniform or combat gear, with some battle scenes when they first arrive in Cyprus, followed by day-to-day life in camp once they defeat the Turks. It helps give some context to Lester's Othello, never a character who's that easy to sympathise with. The military is the world that he knows, and matters of the heart have always taken a back seat until now. If his whirlwind romance and marriage are out of his comfort zone, then it's slightly more believable, if no more forgivable, that he falls for Iago's accusations against Desdemona and reacts so severely. 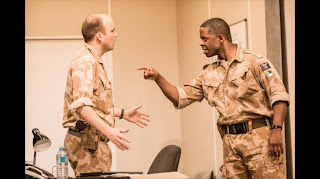 Lester's Othello is neither a good nor bad man, rather one whose personality isn't rounded enough. It's a powerful performance, but there's not many productions where Othello isn't overshadowed by Iago, and so it proves again here. Kinnear mines the humour in the villain, and Christopher remarked on how clear his understanding of the text is, and how that's reflected in his delivery. The Iago the audience sees is possessed of a genuine malice, but his scheming seems to be more prompted by his sheer glee in being able to act the puppet-master to his supposed superiors. His Estuary accent implies perhaps why he might have been overlooked for promotion, as well as letting him adopt a salt-of-the-earth persona that lends a chilling plausibility to the fact that everyone trusts him so unreservedly. 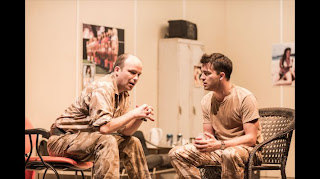 Jonathan Bailey's Cassio is suitably handsome and heroic but with a lethal touch of naïveté in there as well, and Vicki Mortimer's set evokes both the Mediterranean location and the frustrating, claustrophobic world of identikit prefab huts that mixed with a dose of testosterone leads to his downfall. This functional setting also means we get Desdemona's murder in harsh fluorescent lights, which not only makes a change from the traditional shadowy scene but also lends the act a brutality that had audience members flinching.

Vinall's Desdemona is particularly young and fragile looking even before she becomes an obvious outsider on the base, which makes it a bit more understandable that there's concerns about her marriage at first, in a modern context where her husband's race isn't a socially acceptable objection. (For the most part the racism in Othello is casual rather than institutional, which is why I think it more easily adapts to a modern setting than The Merchant of Venice.) 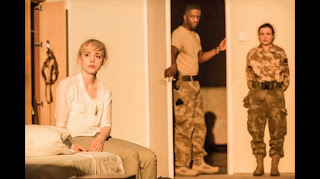 Less successful for me was the recasting of Lyndsey Marshal's Emilia as a soldier. In modern dress female soldiers make sense, and it further isolates Desdemona if Iago's wife isn't also just along for the ride; but Kinnear and Marshal play their marriage as one where the wife is doting and subservient to a borderline abusive husband, and it just doesn't feel plausible that a woman who's seen active duty would be such a doormat. She gives a much more powerful performance after the interval, but this still jars with the Emilia we saw in the first half of the play. I also had reservations about Tom Robertson's Roderigo, the buffoonish Sloane unknowingly financing Iago's schemes. Largely played for laughs I felt his performance crossed the line into parody; I had the feeling his portrayal might have been a specific Made In Chelsea reference but as I don't watch that show I can't be sure. 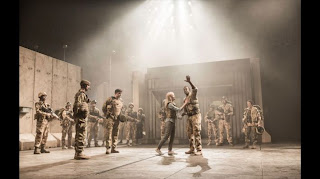 The production's other big problem is one that seems to be becoming all too common in Shakespearean performance lately, as it comes in well over the three-hour mark. It's actually, particularly in the first half, very well paced, with the real feel of a thriller helped by Nick Powell's music, electric guitars sounding like they're about to launch into an Eminem song at any moment. But perhaps a bit of pruning would have made it work even better, and avoided the drag of a couple of scenes in the last two acts. So not a perfect production but for the most part very well acted, well thought-out and managing to find a relevance in actions that can feel pretty alien to a modern viewpoint.

Othello by William Shakespeare is booking in repertory until the 18th of August at the National Theatre's Olivier.

1is it just me who thought Lester's pronunciation of "handkerchief" was weird? With him really hitting the D in hanDkerchief? I half-expected Brian from Family Guy to come in and ask him why he's saying it like that.
Posted by nick730 at 23:51