PREVIEW DISCLAIMER: I really don't remember booking a preview performance for this, but think the press night might have been brought back after I booked; it's now next week. 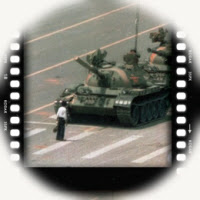 Lucy Kirkwood's Chimerica opens at the Almeida complete with three cast members (Benedict Wong, Andrew Leung and David Tse) from Hampstead's just-ended #aiww1, and like that play it looks at the rise of China and how the ruling party treats those who don't toe the line. But as the title suggests this time there's two nations being thrown together, and at the heart of Kirkwood's new play is the relationship between China and America, and how the two nations view each other. Spanning 23 years over two continents, and coming in at over three hours, this is an epic in more ways than one. Set during last year's US Presidential election campaign, the action is haunted by the deaths of protesters in Tiananmen Square in 1989, and especially by that day's best-known image of a lone man standing in front of a row of advancing tanks.

Stephen Campbell Moore plays Joe, the photojournalist who took the famous picture, and has never quite matched it since. On a brief assignment to Beijing in 2012, he meets with his friend Zhang Lin (Wong) who mentions a rumour that the "Tank Man" might not have been executed by the authorities as Joe had assumed, and may in fact be living in New York under an assumed name. This starts Joe off on a quest to follow up the iconic image with the story of, he hopes, a Chinese rebel who's found a better life in America. 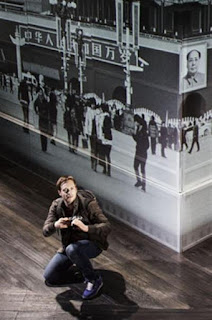 Lyndsey Turner's production approaches the ambition of Kirkwood's script confidently, ploughing straight ahead into its multiple storylines and concerns. Helping its epic scope come to life is Es Devlin's set: A rotating white cube which Finn Ross' projections cleverly follow as it turns, it owes a clear debt to Tom Scutt's amazing set design for 13 - it can't match that design's size or complexity but does benefit from a play that's much stronger in the first place, with a witty script whose frequent funny moments balance the serious issues it covers. 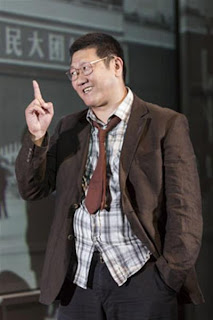 Joe is an interestingly complex central character whose fight to bring an everyday hero back to the public eye has more than a little self-interest behind it, and with a sometimes dubious moral compass, checked by his English friend and on-off love interest Tessa (Claudie Blakley.) More straightforwardly sympathetic is his Chinese counterpart, in another strong performance by Wong: Haunted in more ways than one by the death of his wife (Elizabeth Chan) some years ago, any rebellious instincts of Zhang Lin's own have been firmly in the background. But, initially afraid that Joe's investigations might get him in trouble, they eventually lead him to a crusade of his own, against the out-of-control industrialisation that's covered the city in a thick layer of smog that's killing his neighbour through a condition known as "Beijing Lung." 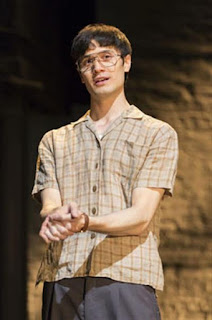 There's strong support from Sean Gilder as a grizzled reporter, and David Tse, Vera Chock, Karl Collins, Trevor Cooper and Nancy Crane in multiple smaller roles, while flashbacks to Zhang Lin's younger self (Leung) set up the relationship with his late wife that will define him in the present day, and provide clues about some of his true motivations: Because in the play's final twist the Tank Man story Joe uncovers will turn out to very different to the one he was looking for, and in my opinion an infinitely more thought-provoking and moving one. 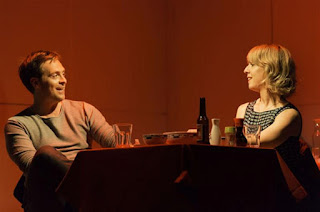 It's left to Blakley's Tessa, a market researcher who specialises in fitting people into neat personality types, to discover what Kirkwood suggests will prove America's Achilles heel with regard to China: That they think they understand the average Chinese man on the street better than they actually do, and that even if they did things are moving so fast they'd soon fall behind in their understanding again. And this brings with it the frightening undertone of Chimerica, which sees China's industry advancing at a rate never previously dreamed of, and imagines the economic and environmental consequences of it continuing to do so. This is a satisfying piece of theatre on a number of fronts, that asks for a lot of your time and concentration but rewards you for it.

Chimerica by Lucy Kirkwood is booking until the 6th of July at the Almeida Theatre.

Running time: 3 hours 10 minutes including interval. (The interval comes after 1 hour 45 minutes so it may be advisable not to take on too many fluids before going in.)

1this is why I wonder if the Chimerica start date might have been moved back by a few days, to free up the #aiww actors who only finished that show last Saturday.
Posted by nick730 at 23:44