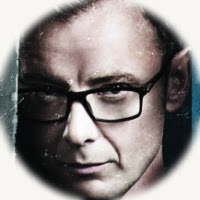 I thought part of the idea behind Jamie Lloyd's Trafalgar Transformed season was that there'd be a different configuration for every production? Perhaps I was misinformed, as the second show in the season is again in traverse, in a similar set-up to the one used for Macbeth. 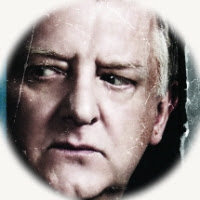 This second show is The Hothouse, a Harold Pinter play but not one that's remotely typical of his work. It's not quite a black comedy, not really a farce and doesn't reach the depths of subtlety that many of his plays do, but it is entertaining, in a twisted way. Roote (Simon Russell Beale) runs a nameless mental institution, assisted by the ruthlessly efficient (or just ruthless) Gibbs (John Simm.) It's Christmas Day but any festive cheer is dulled by the death of one patient, and the fact that another has given birth to the child of a staff member. Most of the staff seem to have an idea of the father's identity, so the hunt is on for a scapegoat - the junior Lamb (Harry Melling) fits the bill.

Indira Varma's Miss Cutts is a pneumatic temptress straight out of a Carry On film while John Heffernan's Lush has a suave exterior that's punctured a bit when he and the institution's director have a drunken fight over cake. 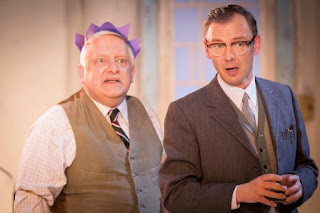 Written in 1958 but not staged until 1980, it's tempting to see The Hothouse as a lesser work - it's certainly an oddity, and I think it took both Christopher and me a while to adjust to the difference from any other Pinter work we'd ever seen. Most obviously missing are the famous pauses (although the writer here makes a more overt use of repetition than usual, that serves a similar purpose.) And despite the occasional sound of sighs and screams echoing across the stage, there's less of the menace I normally associate with Pinter - although this may be down to the way Lloyd's characteristic fast pace has been injected into the piece. 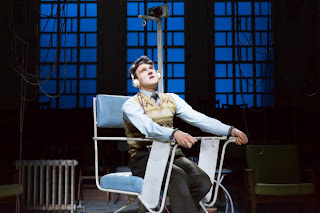 In fact the violence is here much more overt, most notably in a scene before the (unnecessary) interval where Lamb is tortured under the pretext of helping Gibbs and Cutts with an experiment. And though we've got an excellent cast here, Simm and Varma are the only ones really playing against type, and doing it well. SRB, Melling and The Heff are all very good, but I feel like I've seen all their performances before. Meanwhile Clive Rowe and Christopher Timothy are rather wasted in roles that are little more than cameos. 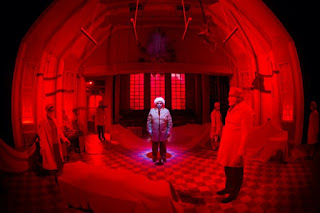 I'm coming across more negative about The Hothouse than I perhaps felt watching it, and it's certainly a lot of fun. It does have a dark bite of satire on cruelty and abuse of power, but it's a bit of a blunt instrument. Nobody comes out of this badly, but Soutra Gilmour is starting to come out of this season best of all - from the (comparatively) cheap seats at the back, her reconfiguration has turned Trafalgar 1 into a more intimate space despite the stadium seating, and is for me a better use of the space than the tiny proscenium arch stage we normally get in this venue.

The Hothouse by Harold Pinter is booking until the 3rd of August at Trafalgar Studio 1.