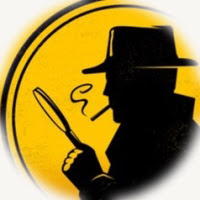 I'd been put off by the uninspired title from seeing The Play That Goes Wrong's initial run at the Old Red Lion, but some very enthusiastic recommendations saw me give it a go as it gets a West End stint at Trafalgar 2. Henry Shields, Henry Lewis and Jonathan Sayer's farce sees the chaotic Cornley Polytechnic Drama Society take on cosy murder mystery "The Murder at Haversham Manor" and be defeated by it at every turn. This framing device gets the briefest of introductions from a surly techie (Rob Falconer) whose preoccupation with finding his Duran Duran CDs will later distract him from his work; before we launch straight into the disastrous first night, and the discovery of a dead body (Joshua Elliott) that doesn't look all that dead. Especially when the other actors keep treading on him.

There's a romantic couple (Lotti Maddox, Dave Hearn) who are thrilled to be on stage - a bit too visibly thrilled considering they're supposed to be in mourning; the lord of the manor (Lewis) whose voice projects very well, especially when he's backstage; a butler (Sayer) who's elderly when he remembers to be; and a stage manager (Nancy Wallinger) who ends up in the limelight as much as the cast. Visibly panicking in the middle of it all is Shields' Chris, the director who's also given himself the lead role of the detective. I may not be crazy about the title but at least it can't be accused of false advertising - the cast and director Mark Bell seem to have included everything that could possibly go wrong, and it's kind of glorious. 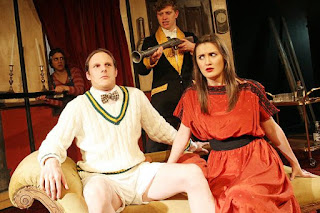 The Play That Goes Wrong really is a relentless hour of perfectly-orchestrated slapstick, timed just right by a cast that seems fearless (the two leading ladies in particular must be covered in bruises.) There's little more I can say about the show without just giving away the best gags but highlights include the way bodies get removed from the stage, a running joke that requires the cast to do their best spit-takes, and a sequence described in a post-show Q&A as "the loop" in which a forgotten line of dialogue threatens to make the show never end. The construction of Lewis' set is also worthy of mention, the timing of its malfunctions as well-choreographed as those of the cast. The action spirals into bigger and bigger catastrophes but the laughs come right from the start - I don't think I've seen people wipe away tears of laughter quite so early in a show before. My one criticism would be that the blocking for the transfer to Trafalgar 2's thrust stage has left the side seats with a close-up view of someone's back a bit too often, but for the most part this is a finely-tuned piece of ridiculous comedy.

The Play That Goes Wrong by Henry Shields, Henry Lewis and Jonathan Sayer is booking until the 1st of June at Trafalgar Studio 2; then from the 31st of July to the 26th of August at Pleasance Courtyard, Edinburgh.