Theatre review: As Is 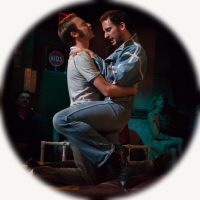 Another revival from the 1980s at the Finborough, and it's what they're billing as the first-ever AIDS play, William M. Hoffman's As Is. The play opens with a pair of exes arguing over who gets which of their shared possessions. But Rich (Tom Colley) is using the squabble as a delaying tactic for what he really needs to tell Saul (David Poynor,) namely that he's tested HIV positive. The following 80 minutes flash both back to their relationship and its end, and forward to Rich's deteriorating health - and the ex-boyfriend who still loves him remaining at his side as a constant support. As well as this personal story that carries the heart of the narrative through, Hoffman also spreads his focus out to the New York gay community at large - the liberated, promiscuous subculture of the 1970s that was so vulnerable to an unknown killer disease - and the support networks that they created in its wake.

This attempt to be all-encompassing runs the risk of losing focus, but fortunately Andrew Keates' production manages to anchor everything together, with a pair of appealing central performances backed up by a busily multitasking supporting cast. 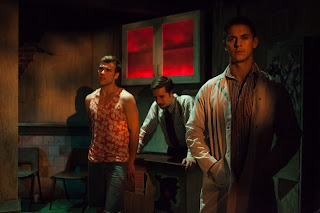 If As Is sometimes fails to coalesce dramatically, it's down to an admirable ambition in how much it tries to convey about an epidemic that was at the time as mysterious as it was frightening. Inevitably the gay experience of AIDS is the focal point but we also get glimpses of how the disease doesn't discriminate along the lines people thought it did - with Anna Tierney as the pregnant, HIV positive wife of a drug addict joining in with a support group. 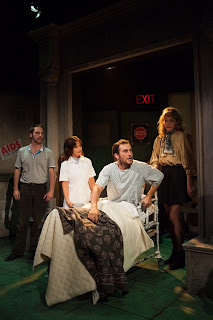 It's also admirable how this early foray into writing about the disease isn't, like may of its successors, without its lighter side. A thread of gallows humour runs through it alongside it's characters' insistence on entertaining each other with terrible old jokes; and a pair of sexually frustrated volunteers (Paul Standell and Jordan Bernarde) on a support phone line provide a scene of comic relief. (As the following publicity shot may illustrate, Standell convincing as someone who's not getting enough offers of sex requires a certain amount of suspension of disbelief and some pretty good acting.) 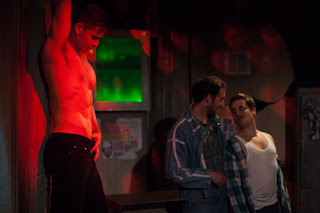 With complacency about improving survival rates leading to a rise in infections again, this revival is a welcome reminder of the horror and indignity of AIDS and the combination of terror and hatred that greeted it when it first emerged, with people afraid to touch or even breathe the same air as someone infected, for fear of catching something. Hoffman's attempts to educate on a number of fronts sometimes result in the play feeling too bitty, but it always has the touching central relationship to come back to, and Keates' production handles it sensitively but not too delicately - and even manages to find something uplifting within the bleak context.

As Is by William M. Hoffman is booking until the 31st of August at the Finborough Theatre.