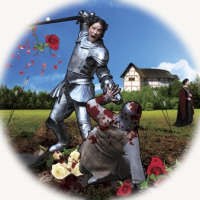 The play usually referred to as Henry VI Part 1 was written long before Shakespeare's more famous Henry V, but that play's ending haunts Harry the Sixth, the first in the trilogy which Shakespeare's Globe is staging under the plays' original titles. The Chorus of Henry V ends the play by reminding us how the warrior king's famous gains in France were quickly lost under his son's reign. And so as Harry the Sixth opens with the funeral of Henry V, his coffin remains on stage for the first half of Nick Bagnall's production, opening to reveal swords as the battles continue. The late king's successor as scourge of the French is the heroic Lord Talbot (Andrew Sheridan.) The Dauphin (Simon Harrison) and his cronies continue to be incompetents who spend most of their time bragging then running away, but this time they have a secret weapon: The teenage Joan of Arc (Beatriz Romilly) will prove Talbot's nemesis.

Back in England, the new king is still a child, and while the Lord Protector the Duke of Gloucester (Garry Cooper) seems a steady hand, he faces opposition from the ambitious Bishop of Winchester (Mike Grady.) And, as red and white roses start to appear pinned to people's clothes, this is far from the only division in Henry's kingdom. 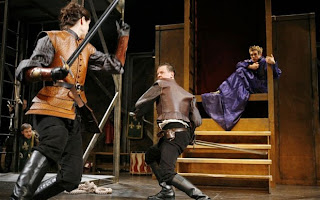 This sequence of Histories, charting events later than the other quartet but written earlier in Shakespeare's career, is not that frequently performed, so they're among the last remaining plays in the canon I hadn't seen; they're often merged and/or rewritten so it's pleasing that my first chance to see them comes in a complete sequence of the plays1, each treated as stand-alone as evidenced by the original titles used. It's kind of ironic that the play actually named after the king doesn't feature him that much, even if this production keeps him centre stage throughout: Graham Butler's Henry spends almost the entire time on his throne, cowering between the metal towers that are the centrepiece of Ti Green's set, sometimes retreating into a book to avoid the infighting going on around him. Perhaps a more intentional irony in the title is the use of the nickname Harry, highlighting the difference between him and the father more commonly referred to by that name. After about an hour's silence, Henry suddenly finds his voice, and one of the strands of the play sees him taking on the decision-making that is his destiny - to the consternation of Gloucester, who's got used to guiding him. 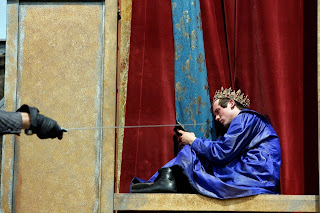 Mary Doherty serves as a chorus-like figure taking on many small parts throughout the play until she can assume her main role of Margaret, the French princess Henry is talked into marrying to try and end the conflict. Wooed by proxy of the Duke of Suffolk (Roger Evans,) who loves her himself, Margaret's ascension to the throne means the play can end on a cliffhanger as Suffolk hopes to gain power through her.

Although it's a shame that any Shakespeare play should become a rarely-performed curiosity when you can't walk two paces without tripping over a Twelfth Night, there's no question Harry the Sixth isn't his finest work. It lacks a strong through-line as its multiple plots unfold at an uneven rate, and Sheridan's likeable Talbot, the closest thing to a hero, is dispatched too soon. Its status as Tudor propaganda is also at times unsubtle, although as the crowd reaction proved, the jokes at the expense of the French haven't gone out of style. But if the play itself isn't the greatest, the production makes it entertaining with a lot of the lively doubling characteristic of touring Globe shows, and some nice creative touches - I particularly liked Henry V's coffin coming to the fore once again, the Flag of St George picked out on it in flowers becoming the red and white roses that will come to symbolise the York vs Lancaster division. The first leg of the Globe's run through the Wars of the Roses is a promising one.

Harry the Sixth by William Shakespeare is booking in repertory until the 8th of September at Shakespeare's Globe; also touring to Barnet, Belfast, Oxford, Cambridge and Bath.

1Minus Richard III, but that's hardly a rarity. And the running time suggests there's been some hefty cuts, but then productions of many Shakespeare plays can benefit from a sensitive edit.
Posted by nick730 at 23:00