Theatre review: In the Vale of Health: Japes Too 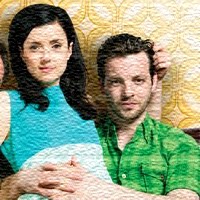 Three quarters of the way through Simon Gray's In the Vale of Health sequence, and all I am is more strongly convinced that staging this quartet is an incredibly elaborate vanity project, and one created for the benefit of someone who isn't even alive to enjoy it. The original stand-alone play was Japes, about a ménage à trois that sees Anita (Laura Rees) married to Michael (Jamie Ballard) for decades while carrying on an on-off relationship with his younger brother Japes (Gethin Anthony.) Then there was Michael, a shorter piece which ditched the first act and retold the second from an ever-so-slightly different angle. And now there's the third (though written second) in Hampstead's series, Japes Too, which aims to follow the characters from the original play, but see how things might have turned out if certain details had been different.

And Japes Too does have a different ending to Japes and Michael, but that's all - of the 2-and-a-quarter hour running time, the story only majorly diverges in the final 15 minutes, when Japes moves to the South of France. This time Anita chooses not to join him, and things work out a lot better for almost everyone. I'm sure there are differences in the two hours preceding this. Michael and Japes like to quote poetry to each other, often pieces they wrote when younger, and nitpick over the huge difference a small change in wording can make. So undoubtedly the different plays have many such instances, but the trouble is from an audience's perspective it's impossible to pick out what these life-changing word swaps might be and how they affect anything.

So we're left with, as I suggested last time, merely different drafts of the same play, which I'm sure makes for a fascinating exercise in form for the writer, but are surely not meant to be performed together (they weren't during the playwright's lifetime.) Tamara Harvey and her cast make cosmetic changes to differentiate the plays - Lucy Osborne's set is reconfigured with every version and this time Japes limps on the right leg instead of the left - but the more meaningful differences are imperceptible to someone who's not utterly immersed in the plays. I wonder if anyone's booked to see the whole quartet over a day or two  - they must feel like it's Groundhog Day. Even with a few weeks separating my visits to the Vale of Health, the sight of Gethin Anthony's arse in tight trousers was the only thing keeping me in my seat after the interval. At least the final part claims to present pieces of the story we've not already seen from three, barely different, angles.

In the Vale of Health: Japes Too is booking in repertory until the 8th of May at Hampstead Theatre Downstairs (returns only,) then transferring to the main stage.