Theatre review: In the Vale of Health: Missing Dates 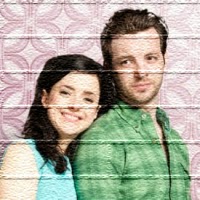 SIMON GRAY: Hello my agent! Simon Gray here. I've written a play called Japes, it's about some obnoxious, drunk intellectuals fucking.
SIMON GRAY'S AGENT: Well, you're Simon Gray, so that's pretty much what I'd expect. Shall we go stage it in a theatre then?
SG: Sounds like a plan.

SG: It's Simon Gray again! Remember that play Japes?
AGENT: Yes, we staged it, on a proper stage, with human actors and everything. It was OK.
SG: Well, I was wondering what would happen if I changed a couple of words in the first three scenes - would the story turn out differently?
AGENT: Oh, well that's a wacky thought to have. Bye then.
SG: No, I actually wrote it! It's called Japes Too, and 3/4 of it is indistinguishable from Japes.
AGENT: Hmmm, sounds like staging that within a decade of Japes would be utterly pointless. How about a rehearsed reading? If we're lucky it might rain, and some students might come see it to stay dry.
SG: That'll do!

SG: Me again! Hey, what if I told you I'd rewritten Japes, but from an imperceptibly different point of view?
AGENT: Why would you do that?
SG: It was that or have a wank.
AGENT: I'd have had the wank. So this is a major new look at the situation that reveals things to be different than we thought? Like a smugger Norman Conquests?
SG: God no, and only the most cynically money-grabbing theatre company would try to market it as such. No, it's called Michael, and it's almost completely pointless except as a writing exercise for my own amusement. If anyone were to try and stage it alongside the other versions, they'd have to keep moving the furniture around just so Gethin Anthony, Jamie Ballard, Laura Rees and Imogen Doel had a clue as to which play they were in at any given time.
AGENT: So maybe if we just stick it in the back of a volume of your collected works, where only the most obsessive Gray scholar will bother looking at it?
SG: Sounds about right.

SG: Guess who! It's Simon Gray, in case you didn't manage to guess.
AGENT: Jesus, aren't you dead yet? You're pretty much the unhealthiest man who's ever lived.
SG: Haha, anyway, remember how I barely rewrote Japes as Michael?
AGENT: Try as I might to forget, yes I do.
SG: Well now I've barely rewritten Japes Too as Missing Dates.
AGENT: Well, the title at least suggests it's mostly new material.
SG: You'd think, wouldn't you? And you'd be wrong! I'd say about 30% of it at most is new.
AGENT: Meh, well it's been a few years since the first one, maybe we can flog this to radio.
SG: Fine - oh and this one actually has one extra character in it near the end, Wendy's husband.
AGENT: Oh good, then he can be a much-needed outside view on how this family is a creepy, quasi-incestuous collection of alcoholics who are unaccountably pleased with themselves.
SG: What? They're what I assume is a completely normal family. No, he's just some trainwreck to be viewed with contempt for not being as clever as the Smugs. Also, if anyone were to stage all four plays in repertory (which nobody would ever do, unless they had a weird hatred of audiences and wanted to charge them £88 to watch the same play over and over,) the audience would be so thrilled to finally see a new face on stage that there'd be audible relief when Tom Mothersdale walked on.
AGENT: Seriously though, why aren't you dead yet?
SG: *dies*
AGENT: Oh dear, he's dead. Well, at least I won't be getting any more calls about his weird vanity project which nobody would ever want to stage as a full cycle of plays. Not unless they were sadistically, dangerously insane.
EDWARD HALL AND TAMARA HARVEY: Hello! We're artistic director Ed Hall and director Tamara Harvey, and we're sadistically, dangerously insane!

In the Vale of Health: Missing Dates by Simon Gray is booking in repertory until the 14th of June at Hampstead Theatre.