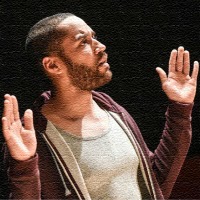 Hampstead Theatre has a police-themed programme at the moment; next week I'll be seeing the main house show, but first I'm at the studio space for Atiha Sen Gupta's State Red, which looks at both the highest levels of the Metropolitan Police, and those on the ground who have to make split-second decisions and live with the consequences. Richard (Geoff Leesley) and Joyce (Maxine Finch) return from a black tie event to find their son, Luke (Samuel Anderson) has returned after going missing for a year. Luke was in the police, but had a breakdown after fatally shooting a black teenager he thought, wrongly as it turns out, to be armed. His best friend and colleague Matthew (Toby Wharton) has been keeping an eye on Luke's parents during his absence, and has driven them home tonight. As the two friends catch up, it becomes apparent that Luke hasn't been getting over the events over the last year; instead, he's decided to add some details to his statement about the killing, which could incriminate both him and Matthew.

But it's not just the two young policemen whose lives could be affected if he changes his story; Richard is a senior officer who actually stands a good chance of being the next Commissioner of the Met, but not if there's scandal in the family. 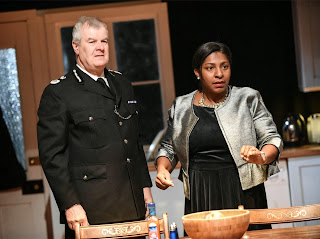 State Red presents a pretty straightforward moral dilemma: The policemen covered up certain details about the shooting, namely that the victim may have mouthed "coconut" at Luke, meaning he might have shot in anger; and that Matthew may or may not have told him to "do it." So the death could be a result of the racial tension between the police and black youths in London, and deserve punishment. On the other hand this would bring his whole family down, and as a senior policeman with a mixed-race son, Richard is a potential Commissioner who might actually do something about the force's institutional racism. 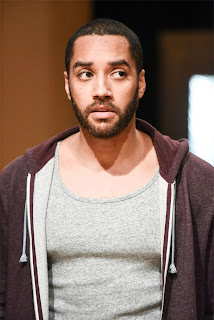 It's complicated further by Luke's mental state; his guilt and desire to be punished has turned into outright obsession with the victim, and while some degree of cover-up has clearly happened, his version of events may not be too reliable either: Even the events going on right now are clearly being distorted for him - he repeatedly asks why nobody else can make themselves say the victim's name, when in fact none of them seem to be avoiding it. Luke's single-minded argument means his dialogue is often quite repetitive, and despite its short running time State Red feels quite overwritten at times: At one point Luke and Matthew quote police statistics at each other in a scene that rather clumsily puts Gupta's research on the stage - it's a bit "here comes the science part." 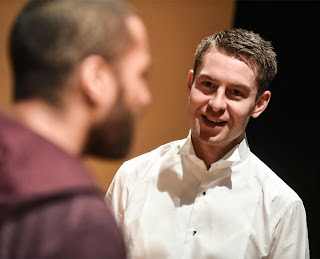 But Douglas Rintoul's production steams ahead through the play's single long scene, ramping up the tension, the decision not to have any music or sound effects except at the very beginning and end an effective one. Anderson and Wharton effectively convey a genuine friendship beyond the tension of their shared secret, and while I wasn't sure about Finch to start with she quietly takes command of the concluding scenes. State Red's attempts at ambiguity result in some clumsy writing at times, but it does have a lot of powerful moments.

State Red by Atiha Sen Gupta is booking until the 6th of December at Hampstead Theatre Downstairs.