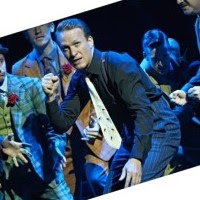 A big musical to finish off my theatrical 2015 and, after Gypsy, another Chichester hit settles into the Savoy for a limited run (it has to be limited because one of the stars will be otherwise engaged for much of next year.) In Frank Loesser (music and lyrics,) Jo Swerling and Abe Burrows' (book) adaptation of Damon Runyon short stories, Guys and Dolls, the less salubrious side of Broadway is addicted to all-night gambling despite the law cracking down hard on it. Nathan Detroit (David Haig) runs a floating craps game* but the police clampdown has made suitable venues hard to find, and the garage where he hopes to hold the next game is demanding an advance of $1000 he doesn't have. But as luck would have it, high-rolling gambler Sky Masterson (Jamie Parker) has just returned to New York, and Nathan happens to know he can't resist an unusual bet.

So Nathan bets him the $1000 that Sky can't get a woman to accompany him on a wild trip to Havana - and chooses prim Salvation Army sergeant Sarah Brown (Siubhan Harrison.) 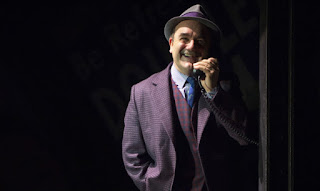 Guys and Dolls is one of those classic musicals that actually feels quite oddly constructed - there's a few lengthy periods without a musical interlude followed by a lot of short songs in quick succession, and a couple of the show's biggest numbers - the title song and "Sit Down, You're Rockin' the Boat" - aren't sung by the leads but by the otherwise minor characters of Nathan's sidekicks Benny (Ian Hughes) and Nicely Nicely (understudy Giovanni Spanó.) Gordon Greenberg gives it a fairly traditional production but Peter McKintosh's suitably glitzy designs help make it feel lively and modern from the off, as the flickering billboard lights come to life and the tunnel-like set reveals itself. 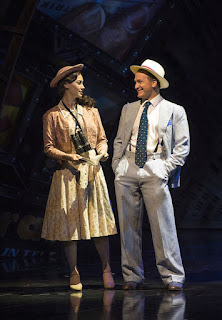 Parker remains a charismatic lead who plays Sky with a sense of self-mockery, and Harrison is a spiky foil for him, but it's Sophie Thompson who steals the show - and gets the biggest ovation at the curtain call - as Miss Adelaide, Nathan's fiancée of 14 years and counting. As Thompson often does, she pulls off an eccentric performance not everyone could get away with, her squeaky-voiced showgirl going deep and growly when angered, and the increasingly over-the-top lies she's told her mother about her "marriage" to Nathan providing a comic highlight. Not having seen the show since it was last in the West End ten years ago, I'd forgotten how many of the songs Adelaide also carries, including one of the best comic songs, "Adelaide's Lament" ("A person can develop a cold.") 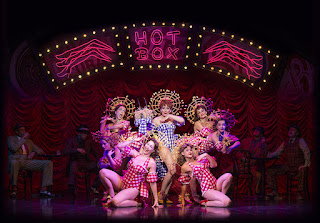 As well as bouncy choreography from Carlos Acosta and Andrew Wright, Greenberg's production also sneaks in a lot of little visual gags in the background to keep things ticking along energetically. Although in many ways Guys and Dolls provides exactly what you'd expect, it does it with flair and feels like a rare West End show done for the fun of it rather than solely as a cash cow.

Guys and Dolls by Frank Loesser, Jo Swerling and Abe Burrows, based on stories by Damon Runyon, is booking until the 12th of March at the Savoy Theatre; then continuing on tour to Liverpool, Newcastle, Aberdeen, Edinburgh, Sheffield, Dublin, Norwich, Southampton, Leeds, Plymouth, Glasgow, Milton Keynes, Nottingham, Canterbury, Cardiff, Bristol, Wolverhampton and Woking.

*floating craps are the kind that are quite hard to flush
Posted by nick730 at 23:28