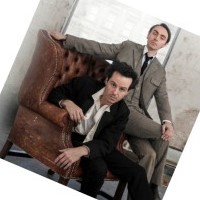 Inspired by a true story of a pair of wealthy brothers found starved to death in a mansion filled with junk, Richard Greenberg's The Dazzle gets a site-specific production from Simon Evans in the former Central St Martins School of Art in Charing Cross Road, rechristened Found 111. In early 20th century New York, Langley Collyer (Andrew Scott) is a renowned concert pianist blessed or cursed with incredibly acute senses and a memory that doesn't discard anything. So he can remember things he saw from his crib, and hearing a piece of music played even fractionally out of tune is like torture to him. It's made him wildly eccentric, and as his peculiarities have got worse his brother Homer (David Dawson) has given up his job as a lawyer. Ostensibly acting as Langley's accountant, he's actually more like his brother's carer, making sure he bathes, eats and turns up to his concerts, none of which he could necessarily be trusted to do of his own volition.

Into an already odd situation comes Milly Ashmore (Joanna Vanderham,) an heiress smitten with Langley's genius. Worried that his brother is getting through their fortune with his erratic spending, Homer encourages the relationship despite his apparent dislike for Milly. 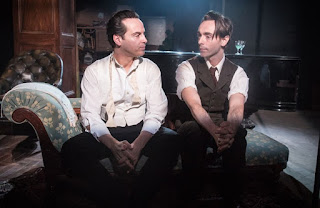 Although I can see how the venue must have appealed as a framework for telling the story (an old building not in the best state of repair, the auditorium reached via numerous winding staircases and corridors) Found 111 isn't a space that endeared itself to me - especially not the narrow chairs squashed tightly together, and I imagine getting anyone with a disability to the performance space is a baffling ordeal. But once you get to the studio itself Ben Stones' design effectively conveys a small room somewhere in the middle of a Harlem mansion, where the brothers mostly restrict themselves. Initially just a bit murky and cluttered, by the second act it's started to become an assault course thanks to all the junk Langley in particular can't bear to part with. 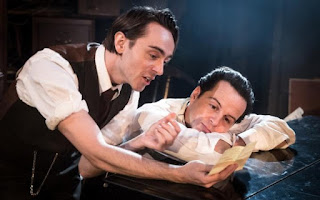 The Dazzle is an eccentric play about eccentric people - though they really existed, Greenberg has largely imagined their lives, and Scott plays Langley with a sense of pained distraction, always grasping for, but not quite reaching, what he's trying to say, and reacting manically to any sound or sight that offends his sense of how things should be. Although the sane one in comparison, Dawson's Homer also has some of this sense of manic distraction, eventually sinking into a kind of madness himself. 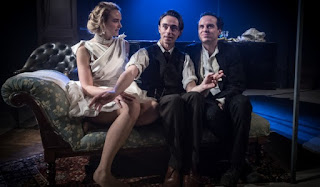 The second act takes place some years later, with a much-changed Milly returning to find the brothers in an even more desperate state. Greenberg's imagining of Langley is as someone so dazzled by the tiniest thing that he can't deal with life at large. Vanderham matches up to the two men with a character who initially seems like a dizzy rich girl but reveals depths as her fortunes change. And it's the three strong performances that anchor an interesting play that could have become tangled up in its characters' mannered behaviour, but ultimately turns out to be a quietly moving, claustrophobic evening.

The Dazzle by Richard Greenberg is booking until the 30th of January at Found 111, 111 Charing Cross Road (returns and day seats only.)