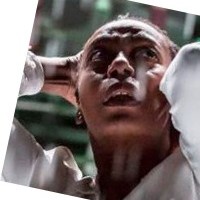 Penelope Skinner's Linda opens with the title character bemoaning the fact that cosmetics for women over fifty are regularly advertised with images of much younger women. There'd be irony in the 55-year-old Linda being played by an actor ten years younger, if it weren't for the fact that she's a very last-minute replacement: When Kim Cattrall pulled out of the production with less than a week to go, the Royal Court turned to Noma Dumezweni, who'd only recently worked with director Michael Longhurst, and who's due to make her own directorial debut there next year. Dumezweni's won an Olivier, although hopefully she doesn't bring it up in conversation quite as often as Linda does the marketing award she won ten years ago. She's head of branding at a beauty company, and her "Changing the world, one girl at a time" campaign helped turn them from an obscure brand to a world leader, with a charity arm that funds self-confidence workshops for young women. Now that she's over fifty herself, her new project is for the company to stop women her age from feeling invisible, both in their outreach programmes and in the way they market their products.

This is the pitch she's presenting at the top of the play, and in her opinion it's gone very well; but her CEO Dave (Ian Redford) and the other board members are unimpressed and want to stick to the usual young faces. As it happens, the pitch they're going for instead was presented by a much younger woman, the ruthlessly ambitious Amy (Amy Beth Hayes.) 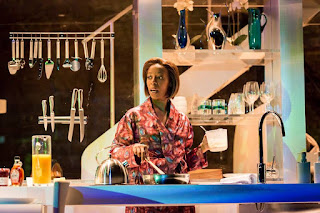 Skinner's theme is the impossibility of a woman having both the perfect career and home life, while at the same time she's told that only by having both can she be happy. Linda actually seems to have managed to have it all, but now that she's also having to contend with the "invisibility" of the older woman, the cracks are starting to show both at work, and at home where her husband Neil (Dominic Mafham) seems to barely engage with anyone, and is suspiciously keen to deny any attraction to the young woman (Merriel Plummer) he plays in a band with. Linda's an interesting central character; dynamic and likeable, she also has a fatal lack of self-awareness, plus a hardness and self-obsession that's harder to sympathise with: Now 25, her daughter Alice (Karla Crome) was very publicly slut-shamed at school in a way that has left obvious physical and mental scars a decade on, but Linda has never quite managed to empathise with her; meanwhile her quieter daughter Bridget (Imogen Byron) gets all but ignored. 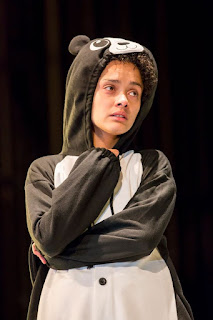 Linda is very ambitious in scope, which does make for a play with a number of well-rounded and sympathetic roles for women (even the monstrous Amy gets a moment to show her human side) but at times makes its tone uneven and some of its plot twists too contrived - even if Linda missed Luke's (Jaz Deol) timesheet fraud for months on end his temp agency wouldn't have. But despite an overlong running time it never feels bloated, as Longhurst's production has a great sense of movement. A lot of this comes from Es Devlin's impressive multi-level set, a tiered revolve reminiscent of a glass display case that jewellery - or indeed high-end cosmetics - might be mounted in. Its smooth lines combined with Luke Halls' projections and the ever-moving cast give it great energy, and help turn a good-but-flawed play into a particularly memorable evening. 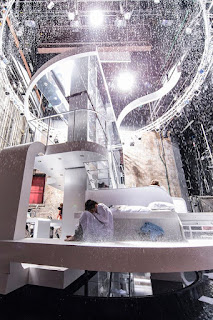 Instrumental in this of course is Dumezweni, who if she didn't occasionally have to consult the script, wouldn't give any other sign of having first laid eyes on it two weeks ago. She's got a confidence and presence that make you root for Linda, balanced out as her flaws and tendency to callousness lead her towards a tragic downfall: Skinner overeggs the King Lear references at time but Dumzeweni pulls it off in a performance that ranges from triumph to tragedy - Ian's first comment after the show ended was "thank god Sex and the City dropped out." And if Linda looks too young to be 55 well, she probably gets lots of free face cream samples.

Linda by Penelope Skinner is booking until the 9th of January at the Royal Court's Jerwood Theatre Downstairs.