Theatre review: Fear and Misery of the Third Reich 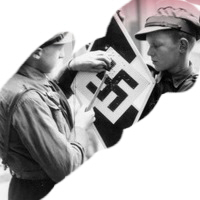 Fringe stalwart Phil Willmott has followed the example of some of the West End directors in forming his own eponymous production company, although unlike them his is a not-for-profit venture. He opens a short residency of two very contrasting works at the Union with Bertolt Brecht's rarely-performed indictment of the rise of the Nazis, Fear and Misery of the Third Reich. There's ominous mentions of the regime's ambitions to invade other nations and spread their power and ideology, but the play's real focus is on Germany itself in the years before World War II actually broke out, and the oppressive atmosphere which sees people betray their neighbours before they can be betrayed themselves. A pair of Hitler Youth (Ben Kerfoot and Tom Williams) patrol as a number of loosely-connected sketches play out, opening with a factory worker (Joshua Ruhle) refusing to join in with the official propaganda, and being carted off to prison.

When he returns minus a couple of fingers, his parents (Jeryl Burgess and Mark Desmond) can't look too concerned, for fear of being incriminated themselves. 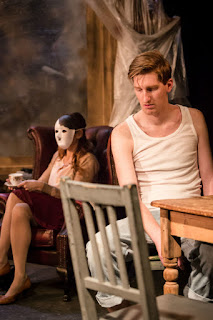 Willmott himself appears as a judge facing a trial in which, however he rules, he'll end up making powerful enemies, as well as as a scientist terrified that his Hitler Youth son Klaus-Heinrich (Joe Dowling*) might have gone off to report him for an offhand remark. Also acting as the play's narrator with a series of short verses connecting the sketches (the translation is by John Willett,) Klaus-Heinrich is actually a pretty reluctant member, bullied by the group's paedophile leader because he rejected his advances. 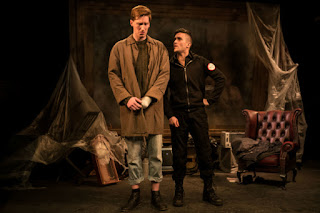 So Brecht shows even the most loyal members of the Reich being screwed over, including the vicious S.A. Man (Feliks Mathur,) whose girlfriend (Harriet Grenville) discovers he's emptied their joint savings account after being tricked into paying for his own uniform. But the official line sees everyone protesting that their finances are so much better under the Nazis than under the Weimar Republic, one of many elements that have all too much relevance to the present day, even as George Osborne continues to announce his financial policies have been successful. 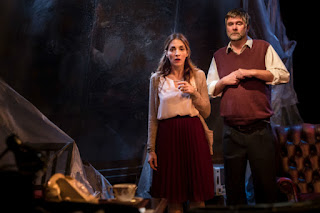 The production attempts to make this chilling universality of the piece a bit more explicit in a way that doesn't really work - Nick Corrall's design litters the set with modern plastics and computer parts among the period debris, but it just ends up looking muddled. The play's black humour also falls flat, and some of the scenes are overlong, but the dramatic moments hold up, notably the climax as we return to the scientist, whose Jewish wife (Clara Francis) has accepted which way the wind is blowing and is preparing to flee Germany.

Fear and Misery of the Third Reich by Bertolt Brecht in a version by John Willett is booking until the 30th of January at the Union Theatre.

*Dowling's programme bio informs us that he's "talented," which strikes me as the bio equivalent of Instagram gays tagging their own selfies as #sexy #handsome #hot. I mean, he obviously is talented - they don't let just anyone into the Pauline Quirke Academy. It's not like the Linda Robson Academy.
Posted by nick730 at 18:04