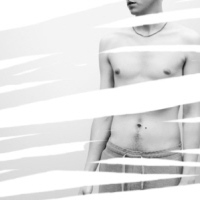 Another Bruntwood Prize winner comes down to London, to the Royal Court Upstairs this time, with Anna Jordan's Yen taking us to a dark council flat in Feltham. 16-year-old Hench (Alex Austin) and his 13-year-old half-brother Bobbie (Jake Davies) are shirtless, barefoot and filthy, fending for themselves after their alcoholic mother Maggie (Sian Breckin) moved in with a new boyfriend who doesn't want them there. They left their clothes at their grandmother's to be washed, but she also ran off with a man so now they're down to one T-shirt between them for when they make a special trip outside - usually to shoplift some food. Hench sometimes has night terrors and wets the bed they share, while Bobbie has unspecified behavioural issues and is meant to go to a "unit" in the daytime; but it's the summer holidays and the boys spend their time in the flat drinking stolen beer, playing Call of Duty, watching porn and shouting at the dog, Taliban, they've got locked up in a bedroom. It's Taliban who brings a new face to the flat when concerned teenage neighbour Jenny (Annes Elwy) comes round to threaten to call the police if they don't stop mistreating the dog.

Instead Jenny, who's recently moved from rural Wales after the death of her father, sympathises with the boys and ends up spending a lot of time with them, taking the dog for walks and making sure they're all eating; her empathy will inevitably come back to bite her. 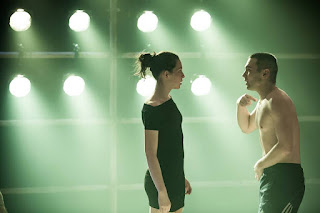 Georgia Lowe's traverse design is deceptively simple but the metal bars that flank the stage dominate more than just the look of the play - as well as a cage-like structure director Ned Bennett also uses them as a climbing frame for the brothers to clamber over. They even need to climb up it to look out of the window, as if even getting to see some sunlight is an achievement. It's all part of a theme of the boys being borderline feral - as the audience enters, Austin and Davies are climbing the bars like monkeys and pelvic thrusting in time with the porn soundtrack playing, while Bobbie's identification with the dog extends to him dropping to all fours and barking when he gets upset. 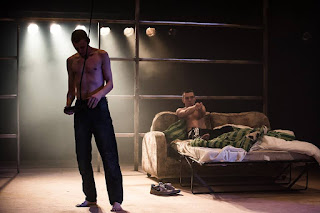 It's a bit of a heavy-handed approach, with Jordan looking at the boys' situation in a fairly simplistic, surprisingly right-wing way to start with (single mother + violent computer games + porn = criminals,) but the play does develop more depth and a surprisingly tender side with the arrival of Jenny, who treats the brothers as people rather than animals and manages to build up a genuine relationship with them as a result. I did get the feeling, though, that despite the script being an award-winner, it was a fairly generic, even naïve story of poverty (are social services really not remotely interested in this 13-year-old who's not turning up to his day unit? who's paying the electric bill when the boys can't even seem to afford to eat?) raised by an excellent production. 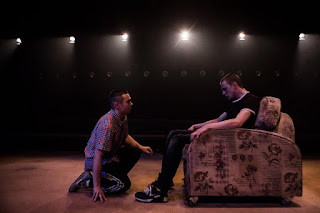 As well as Lowe's designs there's also an oppressive feel from the combination of Elliot Griggs' lighting and Giles Thomas' music, and although not quite European in style there's touches of the surrealistically non-literal in Bennett's production (Taliban the dog is represented by a flashing, barking 4-bar electric fire.) There's also very strong performances, the three actors playing teenagers doing a good job of making you ignore the fact they're obviously much older than their characters. As a play Yen doesn't entirely convince me that it comes with any unique insight but the production turns it into an intense and dark experience.

Yen by Anna Jordan is booking until the 13th of February at the Royal Court's Jerwood Theatre Upstairs (returns and day seats only.)