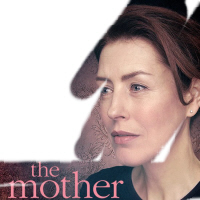 Not only was The Father a critical hit last year (including with me - I put it in my 2015 Top Ten,) it was also a surprising commercial success: One West End transfer would have been impressive for a hallucinatory show about mental illness, but it's getting a second one and a tour. So it's not surprising to see Florian Zeller's companion piece The Mother (again translated by Christopher Hampton) follow it quickly to London, with Laurence Boswell's production setting up shop at the Tricycle. Where The Father's deliberately confusing scenes took us into the head of a man with a form of dementia, The Mother has a much younger character at its heart and a less obvious diagnosis, initially at least, as Anne (Gina McKee) seems to have reacted in an extreme way to empty nest syndrome. An upper-middle class housewife in her late forties, she's dedicated her life to her children, especially her son Nicholas (William Postlethwaite, adding to an already-impressive list of dubious facial hair choices,) for whom she shows an uncomfortably Oedipal level of devotion.

With both her children now grown up and having left home, Anne feels the loss of Nicholas in particular, who doesn't visit as often as she'd like or return her - possibly non-stop - phone calls. 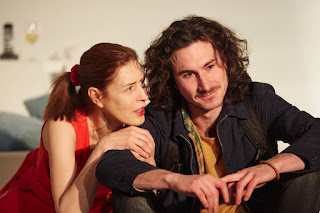 Struggling to find a way to fill her days Anne looks for people to blame for how washed-up she now feels, with her husband Peter (Richard Clothier) regularly getting accused of having affairs or wishing her dead. But the biggest target of her anger is Nicholas' girlfriend Élodie (Frances McNamee,) whom she blames for stealing her son away from her. When the two have an argument and Nicholas returns home for a few days, Anne thinks she's finally got him back from her, but of course not everything is as it appears as we are always, in some way or other, inside Anne's head. 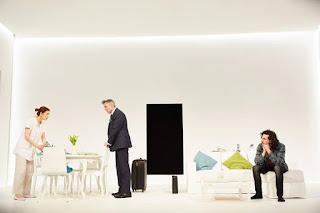 At first each scene plays twice, each time quite differently but with the same overall outcomes; my initial suspicion was that one was reality and the other how Anne's mind twisted it, but as the play goes on no version of the story is without its dreamlike touches, complicating the issue and eventually leading us to the solution Zeller actually has in mind. Being such a close companion to The Father, and seeing it less than a year after that play, are probably not in The Mother's favour; this isn't quite as elegantly structured, it's blunter and less moving , and ultimately not quite as clever. 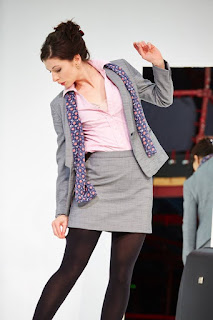 Which isn't to say that, taken on its own, this doesn't have a lot of strengths, not least of all in McKee's gently sad central performance, angry and a bit confused, with a suggestion of being permanently a little bit drunk. Also notable in a generally strong cast is McNamee as Élodie, a character who varies hugely in each of her appearances as she's being filtered through Anne's opinion of her. There's also a thread of dark humour running through the play which undercuts its central character's melancholy. Overall this is another strong piece but probably stronger if seen first out of the pair, as it doesn't quite live up to the brilliance of its predecessor.

The Mother by Florian Zeller in a translation by Christopher Hampton is booking until the 12th of March at the Tricycle Theatre.