Simon McBurney writes, co-directs (with Kirsty Housley) and stars in The Encounter, an adaptation of Petru Popescu's book Amazon Burning

That's the basic story but The Encounter is as much, if not more so, about the way the story's told, in an inventive soundscape by Gareth Fry and Pete Malkin that requires the whole audience to wear headphones throughout. 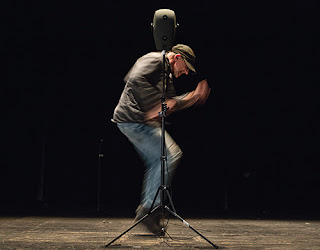 This is because, in a story that plays with the idea of time, McBurney's performance mixes live speech and sound - often distorted through different types of microphone - with material recorded anything between a few months and a couple of years ago, and it's not always obvious which we're hearing. The central piece of technology is "the head," a sophisticated microphone that can make McBurney control precisely where the sound in the headphones seems to be coming from - as he moves around the head it's uncanny how accurately it sounds as if he's whispering in your ear or moving behind you. 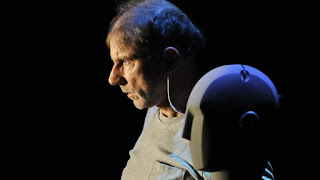 It's very cleverly done, as is the way McBurney weaves different levels of narrative into the way it's constructed - including his six-year-old daughter repeatedly interrupting his attempts to pre-record some sections. Having had numerous people rave about the show this didn't quite live up to it's billing for me - I do often find myself out of step with the consensus on Complicite's work. It probably doesn't help that it's two and a quarter hours with no interval or readmission, and either the Barbican's aircon is overly enthusiastic or I was right under a freezing cold vent. Certainly a technical feat with some genuinely transporting moments, but not quite enough to justify the price (tickets start at £30-odd) or the amount of time I had to spend in some discomfort for it.

The Encounter by Simon McBurney, based on Amazon Burning by Petru Popescu, is booking until the 6th of March at the Barbican Theatre (returns only, streamed live on the Complicite website on the 1st of March) then continuing on tour to Manchester and Athens.