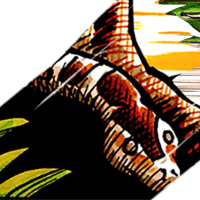 It's been a few years since their last Arcola residency and now minimalist theatre company simple8 resurface at the Park's main house. This time Sebastian Armesto and Dudley Hinton have gone - in another bit of déjà vu after Complicite's The Encounter - into the Amazon jungle with Don't Sleep There Are Snakes, based on Daniel Everett's book about trying to convert a remote tribe to Christianity. Dan (Mark Arends) is chosen as the missionary to the Pirahã because he's also a linguist, and nobody has ever been able to penetrate the Pirahã's language before. After a few false starts - not least of all them trying to kill him after he tells a local trader not to give them alcohol - he actually manages to understand the tribe's language, and the way it's tied in to their unique way of life leads him to some radical conclusions about linguistic theory.

Hinton, Armesto and Hannah Emanuel direct, in a production that if anything feels even more stripped-back than usual on the bare stage of Park 200, with very few changes in lighting. 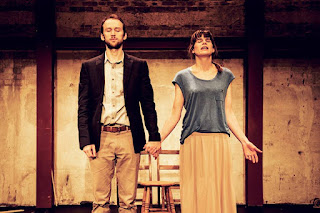 Christopher Doyle, Rachel Handshaw, Yuriri Naka, Emily Pennant-Rea and Clifford Samuel play all the other roles, but for the most part they're the Pirahã, the tribesmen and women named after their actors, and speaking English in place of the native language that proves so simple it's actually incredibly complicated for an outsider to get a handle on. 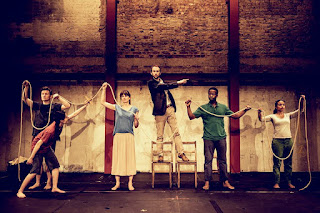 There's a lot that's interesting about Everett's story, and Don't Sleep There Are Snakes frequently hits on a potentially fascinating area to explore, but Armesto and Hinton seem a bit overwhelmed by these many potential avenues, and unfortunately the resulting play is often messy. Its heart should be in Dan's loss of faith as he observes the Pirahã way of life, and in his relationship with them; the cast bring a lovely warmth to the way they embrace him despite never seeing him as even remotely like them. But we all too often get bogged down in linguistic theory. 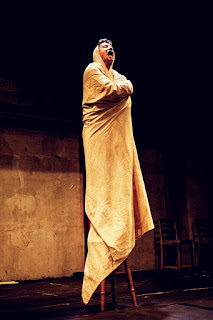 In fact much of this has the potential to be interesting as well, but the script is too easily distracted, and the directors have taken the usual minimalism to an extreme that doesn't often include the visual inventiveness that has been among the company's best assets. There's many enjoyable moments in the show, but they tend to fizzle out and despite the short running time there's much that's disappointingly laborious.

Don't Sleep There Are Snakes by Sebastian Armesto and Dudley Hinton with simple8, based on the book by Daniel Everett, is booking until the 23rd of April at Park Theatre 200.